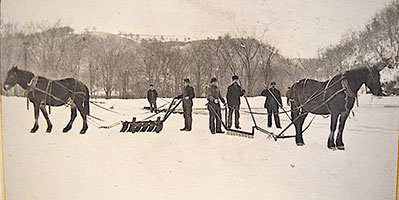 It took a few weeks of hard work in the winter in order to keep perishable foods fresh and dairy products from spoiling through the summer. Before electricity reached rural southeast Minnesota and electric refrigerators became common in the mid- to late- 1930s, there were “ice boxes” in homes and grocery stores while meat markets and farms had “ice houses.” The ice itself was supplied by “ice men,” who cut, hauled, stored and delivered blocks of ice.

The ice came from numerous area ponds, including Buell’s Lake two miles northeast of Houston, Spring Brook Lake near Caledonia, and Schech’s Mill Pond near Sheldon. Toward the end of January, the pond water would be frozen thick enough to harvest – at least 18 inches and preferably 22 inches thick.

That commercial ice was pure according to Al Wieser, Sr. from rural La Crescent while reminiscing in a 1981 newspaper article. “Ice used to be so clear… Creek water is crystal clear in the winter. The further up the valley, the clearer it gets.”

Ice cutters preferred ice blocks 24”x24”x22”. To create ice blocks, the surface would be cut in a grid of lines 24” apart by men or horses with an “ice plow,” which made the first groove in the ice and facilitated uniform cutting. Then special handsaws, with very coarse teeth and handles, would be used to cut into the ice. “An ice cutter did not have to saw the ice clear through,” according to a 1981 interview of 84-year-old Pine Creek resident Roger Finn. “If the ice was cut two-thirds of the way through, you could drive a wedge in it and get a straight cut.” The long-handled wedge was called a “spud.”

Previously, a canal was cut into the pond, so the blocks of cut ice could be floated to a ramp which led to a loading platform, which was usually at the same height as farmers’ wagons.

Bert Sweet, also quoted as a Houston resident in 1981 at age 80, said, “When you started a pond, you had a runway of about 50 feet to float the cakes in.” The cakes of ice were broken off from the grid in rows of eight or 10 and taken up the ramp to the platform where they were separated with a spud.

Wieser recalled watching his father using a horse to pull the long rows of ice blocks up the loading platform at Groff’s Mill Pond west of La Crescent. “It really wasn’t too much work for one horse. The ice was always slid, never lifted.” While working on the ice, the horse would be shod with corks, a sharp piece of metal placed on the horseshoe to prevent slipping. Wieser said the men would cut about 200 cakes a day by hand and received four cents a cake when farmers picked them up. Each ice cutting season lasted about a month. “And this only took care of the farmers in the valley, nearby ridges and the Pine Creek Creamery.” Wieser also noted that the blocks of ice, each often weighing more than 300 pounds, would be carefully slid on heavy planks onto sleighs. “A team (of horses) could haul quite a load.” A farmer’s three or four trips to the pond would provide a year’s supply of ice.

Sweet used a car to pull ice from the ponds. During the early 1930s, Sweet mounted a 30-inch circle saw blade onto the rear axle of a stripped-down Model-T Ford, resting on runners. “It got so we could saw in and chip off 20 cakes at a time.”

During the Great Depression of the 1930s, the lack of jobs made it easy to hire ice-cutters, who worked hard for $2.50 a day. However, Sweet pointed out the danger of a man falling into the water. “Once when one man fell in, we rushed him home. After he changed into dry clothes, he warmed up with a couple of swigs of his moonshine and went right back to work.”

After the ice had been harvested in winter, it had to be stored and preserved in “ice houses” for delivery throughout the summer.