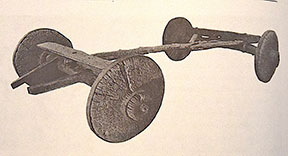 “The new generation lacks both the knowledge and imagination to grasp the actual conditions of life as it was lived by the pioneers,” wrote Hjalmar Holand in 1920 about Norwegian pioneers in southeast Minnesota. Hard work was a given, but these pioneers were at the mercy of weather, insects and specifically for that era – epidemics.

Transforming a wilderness into productive farms required incessant labor. Most trips away from the farm were to the nearest gristmill to have wheat or corn ground. At first, these could be long journeys. There was a hand-fed gristmill south of Spring Grove, where it was difficult to feed grain into the spout slowly enough. An entire handful at one time would disable the mill. One tale described Knut Bergo noticing his grain going in but nothing coming out. A search revealed a mouse below the mill funnel eating the grain and throwing the husks away. But for Bergo, this painstaking process was preferable to previous week-long treks to Dorchester or Decorah with a sack on his back. When the millpond froze, they had to grind grain in a coffee grinder or pound it with a mortar.

The first grain harvest of Ole Oleson Sandness in Wilmington Township was about 500 bushels, cut with a cradle and tied into bundles. Most would be hauled for two days to be sold in Lansing, Iowa. From Spring Grove, the nearest markets were 50 miles northeast to Winona, 35 miles east to Brownsville and 50 miles southeast to MacGregor, Iowa. By oxcart, these trips took a week or two and were attempted only once or twice a year.

A kubberulle was a Norwegian-American oxcart constructed with logs. Wheels were made of disks sawed from the end of an oak log, or kubbe. Despite these arduous journeys, taking one’s crop to market engendered a feeling of satisfaction from self-sufficiency. But the undertaking became much easier after a small-gauge railroad first connected Reno to Preston in 1879.

Rasmus Spande related a harrowing experience when he and his brother-in-law Tore Faae were unexpectedly overtaken by a snowstorm during one winter trip to Winona, “the nearest marketplace where one could buy what there was. It was 40 miles from our place. Making the trip dressed in thin clothing (all he had) and driving the slow-moving oxen in wintertime over impassable roads was the farthest thing from comfort. I had just my blouse and overalls on and froze something awful.”

They finally came to a shanty, where six or seven men refused them shelter and threatened them with violence. Back outside, Spande said, “The snow was getting so deep that we had to walk ahead of the oxen and tramp down a track.” Two hours later (about 11 p.m.) and only two miles farther, their lives were surely saved by coming upon the dwelling of a compassionate German pastor.

Winter was perilous outdoors and even indoors. Ole Kolberg froze to death in 1853 during an accident on the road between Caledonia and Spring Grove. During the winter of 1870, the nine-member Ole Olsgard family about five miles southwest of Spring Grove, had their first cabin burn to the ground with all of their belongings. One son sustained severe burns, and Ole broke his back falling from the roof while fighting the fire.

The winter of 1857 was long remembered as the worst ever endured in the area. Nearly three feet of snow fell and then when topped by a hard crust, trapped deer when their hooves fell through the crust. Hundreds of helpless deer were attacked by wolves or clubbed to death by humans on skis.

During that winter, it was impossible to use horses. However, Embrik Melbraaten fashioned a snowshoe for horse hooves. After his horse became accustomed to the footwear, it was called upon often, especially for funerals. A light sleigh carried the coffin and was followed by mourners and the pastor on skis.