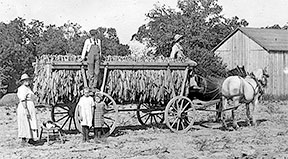 Fillmore County, more than once, was the top tobacco-producing county in Minnesota. Houston County ranked seventh in 1860, third in 1870 and then second in 1880, according to U. S. Department of Agriculture statistics. Fillmore vaulted to number one in 1890 with five acres yielding 7,158 pounds of tobacco. In 1900, Fillmore was still on top with 86 acres producing 105, 420 pounds – far surpassing number two Le Sueur County’s 8,120 pounds. A 1930 newspaper made an astounding claim – that Fillmore and Houston Counties had about 500 acres of tobacco, “all highly profitable.”

Trygve Knutson, one of the last Houston County tobacco growers of the late 1970s to early 1980s, farmed near Sheldon and remembers several tobacco fields on nearby Twin Ridge. He agreed that tobacco was a profitable crop, but he stopped raising tobacco when his Wisconsin buyer closed his business. At that time, Knutson said he had two or three acres of tobacco, about the maximum allowed by the government allotment at that time. There were years when the allotment allowed even fewer acres.

USDA records for Minnesota tobacco harvests began in 1860. The varieties first grown in Minnesota supplied the booming cigar market of the late 1800s but were not the varieties used in cigarettes, which became the most popular product after World War I. But production continued. Minnesota historian Tim Hoheisel concluded, “For decades, tobacco provided farmers another option for income. It was a labor-intensive crop, and growing conditions were less than ideal in Minnesota, but the profit made from tobacco was worth it, for a time.”

Since it took about nine to 10 months to grow tobacco, it is not surprising that growers would be more successful in the state’s southern counties, where there was a 160-day growing season, while the state average was 130 days.

After the labor-intensive processes during the spring and summer months – seeding, planting, weeding, worm removing, topping and suckering (see last week’s column) – harvesting began in autumn with “chopping.” Avis Gaustad Wojahn wrote about the 1970s, when tobacco plants “were chopped off at ground level with a tobacco ax and laid down in the field for a few hours to wilt to lessen leaf breakage,” and then stacked “to keep them from getting sunburned” and be ready for “spearing.” Each plant was speared onto an inch to one-and-a-half inch wide, four-foot long tobacco lath, each holding six or seven plants.

After at least four weeks up to four months of drying, preferably on a foggy December day, when there was the most humidity in the normally dry winter air, the “stripping” occurred. Wojahn related, “Every Christmas when we would get foggy weather, which is called “casing weather” or “tobacco damp,” the laths would be taken down… piled in the shed and covered with a tarp to try to hold the moisture in.”

Rosendahl noted, “If the leaves were too dry, they became brittle and broke, and the value would drop considerably. A small room was built in the southwest corner in the shed where a wood stove was used to keep us warm and also to produce steam to keep the leaves pliable while we were stripping.”

The leaves were stripped from the stalk and separated according to quality. The “sand” or “filler” leaves were usually smaller and dirtier from being so close to the ground and often ragged. “Wrapper” leaves were larger and hopefully free from holes. Wojahn said, the stripped leaves were placed in a bale box, “about a foot high, a foot deep and three feet long,” which were lined with special tobacco paper. A press compressed the leaves into a bale, which after being tied with twine, would weigh about 45 to 50 pounds. Most southeast Minnesota tobacco was transported in January or February, to Wisconsin for sale at either Coon Valley or Westby.