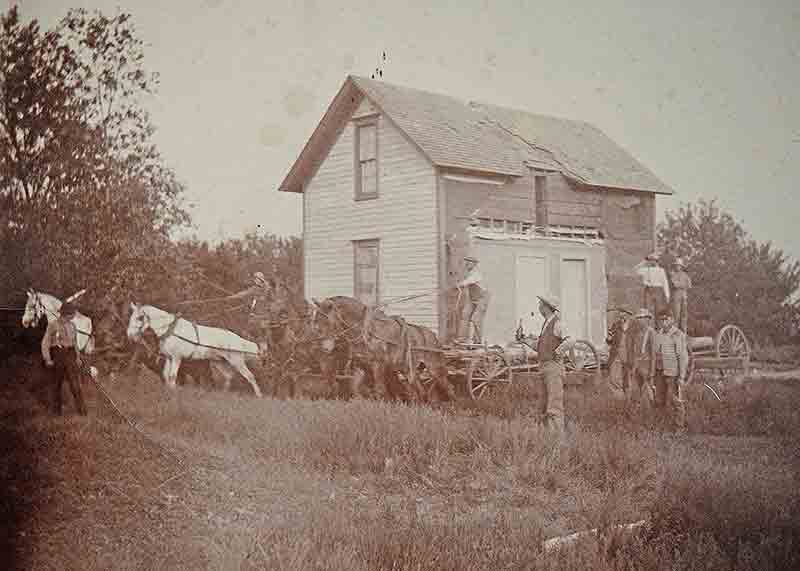 Part two of a series on horses

By the mid-1900s, owning a horse had become a diversion or hobby. But in the early decades of that century, owning horses was a necessity. Horses and horse-drawn vehicles were the mainstays of not only farm work but also travel and transportation.

After pioneering with oxen in the 1850s – 70s, there was a half-century of horsepower. Horses were everywhere. In Houston County, tractor farming did not become prominent until the mid-1930s. Before then, automobiles had made an appearance, but it took a while before they replaced horses. Most of the streets were still dirt – either dusty or muddy.

Before 1880, oxen outnumbered horses. But after barns were constructed for shelter, horses were preferred – much easier to train and work with in the farm fields. They were more versatile, still able to perform heavy work, even moving houses, but they also provided much speedier work, transportation and travel. A rider on horseback could traverse bad roads or where there were no roads at all.

Horses were in great demand; everyone wanted a good team. A stylish rig pulled by a good-looking horse was critical for courtship. Farmers began to raise horses. W. J. Langen (1869-1960) told of raising more horses than cattle in Houston County, since there was a profitable market in La Crosse for heavy, well-broken horses for the draying business. A dray line was a horse-drawn, freight delivery service. Langen said horses were broken (domesticated) at age three and were ready to sell by age four.

While dray-line horses were delivering freight, steeds were also delivering the mail in buggies and passengers in stagecoaches. There were hack drivers who transported a passenger or two in a mini-stagecoach – an enclosed compartment with the driver perched up high on an outside seat. Lunchtime called for a canvas bag of oats being strapped to the horse’s head and buckled on top.

Every business needed a horse or a team. Horses lugged logs out of pine forests in winter and worked in lumber yards in summer. The driver of horses always sat on the right side. For steep declines, lumber wagons had a hand brake on the right side. There were livery stables that rented horses and rigs, especially for private parties, weddings and funerals. There were boarding stables for wealthy townsfolk, who desired to own horses but did not want to care for them.

There were no snow plows, so farmers had to shovel the roads so that horses could get through. Elmer Thies, a Portland Prairie farmer, recalls having a family surrey (light carriage with two seats for four passengers), which in the winter, became a sled for the five-and-half-mile trip to town.

In the winter, horses needed iron shoes with metal knobs called “corks” with which to grip the ice. New corks were screwed into the shoes when the first ones became worn down. “It was great to snuggle under a woolen horse blanket on the sleigh,” recalled Anita Lee Palmquist. “The ride was smooth and quiet except for the jingle of the (harness) bells and the clip, clop of the horse’s hooves.”

Percherons and Arabians were common breeds. Percherons were taller and heavier, good for hard work. But they were not nimble enough for Houston County hills. Arabians, known for intelligence and speed, were used for riding and with buggies. Horses came in many colors, but spotted ones were seen only traveling with a circus.

Horses were everywhere, and so were horse traders. There was money to be made by supplying the right horse for the right purpose to the right owner. The best money came for a matched team, two horses with very similar color, size, weight and collar size. However, it was buyer beware. Some traders were known for “doping” a horse, to sedate an animal that might otherwise be balky or a biter or a kicker.

Whether you were delivering mail or plowing a field, your horse became more than a financial investment. Your equine became a co-worker, a pet, a friend, a member of the family. “Winnie was one of my favorites,” said Palmquist. “I cried when she died. She was my special friend.”

The sources for this column were previously published memoirs of Houston County residents.