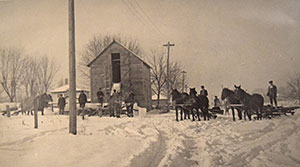 In the 1950s, they were sometimes referred to as “ice boxes” when they were actually electric refrigerators. The true “ice box” was from earlier decades of the 1900s. Town and farm families had ice boxes to keep perishable foods fresh and for making hand-cranked homemade ice cream. The ice in southeast Minnesota was harvested in winter from frozen ponds and then stored in ice houses for summer use. In a 1981 newspaper article, Houston-area retirees reflected on their experiences in the ice business during the 1920s and 1930s.

Each year before cutting ice, ice houses were cleaned out. The sawdust from the previous year had to be shoveled out and often reused. A layer of ice was placed on the floor but always two feet away from the walls. Sawdust was brought in to cover the ice and also fill the gaps between the ice and the walls. The ice house was full after it contained several layers of ice and sawdust. It was then “capped” with a final thick layer of sawdust.

For storage in town at Houston, several men worked for a week or more packing the ice in the ice house. Throughout the following year, only a couple of men were needed to unpack the ice house. Bert Sweet said, “Every so often, we would have to go up and stir the sawdust. It would pack and lose its ability to insulate.”

Roger Finn of Pine Creek said, “Many farmers also had their own ice houses to keep cream and butter cool. Before the Pine Creek Creamery was operating, farmers had to churn their own butter. And once a week, they would travel to La Crosse to trade butter and eggs for groceries.”

Leo Rostad remembered delivering ice three times a week to homes and businesses around Houston. Before delivery, the ice was washed and then weighed. “Knowing the size of each patron’s ice box, the delivery man would break up the blocks accordingly with an ice pick and carry the smaller block and put it in the ice box with ice tongs.”

Those picked-off bits of ice attracted children who liked to suck on ice as a summertime treat. Rostad recalled longer stops in town when “kids would sneak up to the back of the ice truck and chip off little bits of ice and scatter when I returned.

“Sometimes, I had to carry 100 pounds of ice up stairs for quite a distance,” added Rostad. “And some women would complain because I dripped water on their floor. How can you put ice in an ice box without getting water on the floor?”

In her book “Remembering Old Times,” Ingrid Julsrud said the ice house in Houston “was located close to the old creamery just north of the last house on the east end of Plum Street. This was convenient for the creamery, which was a big consumer of ice. The meat market, too, was a big user of ice. It had a big walk-in box where the meat was kept during the hot months.”

She noted that restaurants used a lot of ice, and all the grocery stores had ice boxes, mostly for butter and cheese. The drug store had a soda fountain and ice cream parlor. “It had to pack the large ice cream containers down in much crushed ice and salt, so the ice cream would stay hard. We could buy a banana split for 25 cents” a concoction which might result in an upset stomach in the middle of the night. “You kept your mother awake, too, holding your head up over a pan.

“The ice in the box, of course, melted as the days passed, and we caught the water in a pan under the box. Too often, we forgot to empty it, and before we knew it, there was water all over the kitchen floor.”

Sweet noted that the cost of having ice delivered averaged between $25 and $35 a year. He closed his ice operation in Houston in 1941. “Business was dropping off, and help was getting scarce.” Ice boxes were being replaced by refrigerators, and the young eager workmen were being drafted for service during World War II.