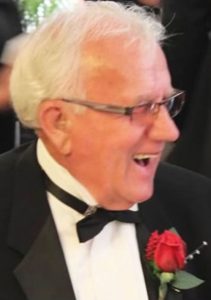 Ordell L. Blagsvedt, 85, of Spring Grove, Minn., passed away peacefully on January 4, 2022. Ordell was born at home on May 19, 1936. He was the firstborn of Elmer and Minnie (Nelson) Blagsvedt. He helped raise and provide for his four younger siblings. In July 1956, at age 20, he married Charlyne Danielson at Mabel First Lutheran Church. One time while cooking, Charlyne asked for Kitchen Bouquet and he brought home a bouquet of flowers, which nobody ever let him forget. Together they raised their two children, Karry and Terry. Ordell kept busy hauling bulk milk and Triple “F” Feed. He bought and sold cars at his local business, “Ordell’s Auto Sales.” He also enjoyed buying, renovating and reselling homes, traveling with family and adventures on their hobby farm. His wife Charlyne passed away in 1976 at the age of 38, the same year their first grandchild was born.

On October 21, 2000, Ordell married his best-friend and love Charmaine (Opsahl), in a backyard ceremony with grandchildren by their side. The union added additional family and much joy to his life. Together, Ordell and Charmaine rarely missed a family event, concert, sporting event, birthday party or pageant. Their combined family of children, grandchildren and great-grandchildren kept them busy. Prior to retirement, he was employed at Winnebago Software/Miken Industries with his good friend Jeb. One time those two set off on a three-week adventure by boat from La Crosse, Wis., to Naples, Fla., and a season on the Naples Princess. For years, Ordell turned down a second piece of dessert because he “was going to Hollywood.” In 2005, he was surprised with a trip to the Walk of Fame, Venice Beach, Disneyland and the Crystal Cathedral.

A celebration of life will be held on Saturday, January 22, 2022, at 11 a.m. at Mabel First Lutheran Church in Mabel, Minn. Visitation one hour prior. The Mengis Funeral Home in Mabel is assisting with arrangements.