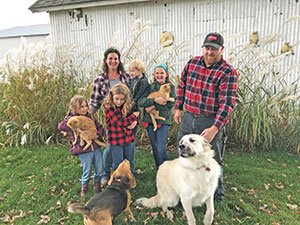 Amber Feine-Rasmussen has been farming full-time since 2003 when she asked her father if she could join him in the family operation. Amber had been attending UWSP (University of Stevens Point); she’d made the dean’s list and enjoyed her soils and water classes, but was tired of “sitting in a concrete box” and hated having to take tests. She had figured out there was a “direct correlation between time spent outside and her physical and mental health.”

Her dad Glenn Feine was supportive of her joining him in his work and gradually taking on more of the operation. He always respected her and her opinion and was a positive mentor.

When her grandfather and her dad passed away recently and her brother became seriously ill, Amber and her husband Jordan took on the work of what had been previously done by five people. Her mom Marcie had helped in the “dairy nursery” before, but now Amber needed to also take care of that.

Jordan, who always helped with the farm, also worked for HVAC until 2007 when he joined Amber full-time on the farm. During the 2016 recession, he returned to HVAC; in 2019 he rejoined Amber on the farm full-time. Jordan as a young man had made it a point to learn how to fix things, a skill he felt essential in life. When it was time to combine their grain the first time. Amber and Jordan researched and did it on their own. (Amber’s grandpa had always done the combining.)

Amber and Jordan farm the home farm of 400 acres – 270 tillable and the rest pasture – and also rent another 100 acres of crop land. The primary operation is raising dairy heifers. They work with four different dairies. Some dairies bring newborn calves to them; some wait until the heifers are 300 to 400 pounds. The heifers are returned to the dairies at different times as well. Some dairies take the heifers back to breed them while others leave them until almost delivery of the new calves. On average, the farm has 400 heifers at any time. This service was started in 2001 by Amber’s parents when their kids were in high school, with the kids a homegrown workforce.

In addition to the heifers, the duo began raising grass-fed red and black Angus in their pastures in 2013. Amber stressed that it’s to have a relationship with her clients. She enjoys being open with people about  what goes on at the farm. People have been responding well; her clients have a desire for better quality meat with no hormones.

When COVID began this spring, Amber faced a big challenge. She had beef ready to send to butcher, but had to send the cattle to a a conventional market and received much less for them. The farm now looks to sell more beef directly to clients, thus eliminating he middle men.  Amber and Jordan plan to continue to grow the operation, noting, “You gotta diversify.”

Amber gets excited about her plans for the farm in the future. She hopes to change over to regenerative ag with her beef cattle. This means feeding and watering the animals where you want their waste to be in order to fertilize the land. She’s looking at creating three paddocks in the pasture land and adding an additional water source in one of them so she can switch the cattle to each area when necessary to provide a new pasture area. She would also like to increase the bluestem and Indian grass as well as other native grasses in the pastures and has been actively harvesting and planting seeds.

The hardest part about farming, according to Amber, is “constantly needing to adapt to changing conditions. Whether it’s weather or markets or family or employees, it’s always something, and it’s seldom easy.” Amber openly tells that she was diagnosed with anxiety a few years ago. She said it takes a lot of faith to be a farmer. “I’m a Christian and I pray a lot. I love farming because it’s my constant reminder that God is in control. I can plant the seeds, but I can’t make the rain fall and I can’t make the sun shine.”

Amber finds the most rewarding part about farming is “in all the busyness to find the moments that make working all the time worthwhile.”

Amber says, with a chuckle, her advice to other women farmers, “All babies should come with nine-year-old sisters!” Turning serious, Amber declared, “You have to stop struggling with the idea you need to do it all. You have to realize you can’t do it all perfectly.”

She continued, “I’m fortunate to have a husband of diverse talents and a supportive family and friends who lend a hand when we can’t do it all (which is often). I want to give them credit for making this whole thing work.” The farm also has some part-time workers who are so appreciated.

Amber lives in the home her grandparents lived in on the family farm. Her generous dining room table belonged to her great-grandmother. With a smile, Amber said she just knew her great-grandmother would have enjoyed seeing the big meals served to employees and extended family.

Amber and Jordan have four children – Autumn (10), Nora (9), Gwen (almost six), and Silas (one and a half). The older three are currently distance learning with R-P schools. With all their pets – a beagle named Macey, a Great Pyrenees puppy named Hagrid, a house cat, and an uncounted number of farm cats, along with Guinea hens and other chickens, there is always activity at the farm. Amber, that very busy farm woman, clearly enjoys every minute of it, happy with her choice in life.