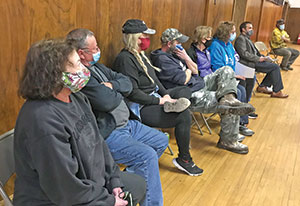 The Houston City Council was joined by members of the public at their March 8, 2021, meeting. Concerned citizens came to share their opposition to the proposed OHV trail.  Sandy Fitting feels the trail will cause erosion and property value loss and asked when the first property had been purchased, claiming that the council had told her they hadn’t started anything yet in 2009. The land had been purchased and the grant had been approved, but no work had been done on the project. Fitting added that there had been a 130 signature petition against the trail at the time and asked what had happened to it. No one seems to know. A special ballot had been requested as well; according to City Administrator Michelle Quinn, this can not be placed on a ballot per state regulations.

Rick Fitting shared that he chose to live in a small town so he could enjoy the quiet; something he fears he’ll lose with the trail. He shared his concern for trying to stabilize the soil on the hill, pointing out that the “whole hill is sand.” Chris Moon echoed Fitting’s opinions.

Heidi Olson opined that people using the trail would not be buying anything or staying at the motel, “They’ll bring what they need!” She went on to ask that the city spend more money on the kids in town. “We have nothing for the kids — how about a rec center or a pool? Do something for the kids!”

Most of the people opposing the trail asked that the council get more information out to the citizens, claiming they didn’t have enough notice of meetings. Councilman Tony Schultz responded that the process has been going on for years. “Nobody’s brushing you off — we listen to everyone that comes in here,” he added. “We make a decision based on the information.” Council meetings are scheduled a year ahead and are posted on the website; people are encouraged to contact city hall with any questions.

Heidi Olson assured Schultz that this would be all over Facebook and the council could expect even more people at their next meeting.

Councilman Cody Mathers told the group there is a link to DNR on the city’s website for more information. Mathers also shared that the noise study has not been done yet since the area was too wet yet.

Quinn noted that the legally abbreviated council minutes are published in the Caledonia Argus shopper, which is sent to all Houston homes.

Public Finance Advisor Mike Bubany appeared before the council to share options for financing of the $1,198,986 sewer plant. The state requires proof of the city being able to cover needed revenue. In order to do this, the city is required to raise the sewer rates to citizens. Bubany presented two options — getting rid of the base “free gallons” and raising the rate by 7.5% per gallon, or keeping the base “free gallons” and raising the rates on everything by 35%. The latter option actually is more beneficial to the majority of the citizens, with small users seeing an increase from their current bill of $22.88 to $30.89 per month.

The council chose to go with the 35% increase (the latter choice) beginning with the July bill. There will not be another increase until 2023. The last increase had been in 2016.

Andrew Forliti of Smith Schafer presented the 2020 audit to the council with a 42-page summary of the city finances. The certified tax levy was up 3% in 2020 from the previous year. The pandemic affected the finances with less spent on police protection and more on equipment for the ambulance. General fund expenditures were under budget in part due to the CARES act. All special revenue funds except the Nature Center had positive fund balances. All city bonds and installments are being paid on time; fire fund and two USDA loans were paid in full during 2020. General funds unassigned fund balance of $356,809 represents a healthy 55% of general fund expenditures; this is necessary since the city receives funding only two times a year.

Included in the lengthy meeting were the following items:

•Matt Mohs appeared to inform the council the treatment plant project should be awarded to Wapasha and the LRAP grant for Westgate Drive was submitted to the state with answer expected in May.

•Lisa Skifton, leader of the local 4-H group, asked for parameters for the group to donate a bench for the new community center; this will be on next month’s agenda.

•The council approved adding a chip sealer to Ellsworth to prolong the life of the road.

•Decisions on the community center included not adding light switches (breakers will be marked), washing the quilts and moving them to the new center along with the Hoedown Queen pictures, the video screen, speaker system, and furnishings.

•Deven VanGundy was added as an EMT.

•The campground at the Nature Center will be open during Hoedown this year.

The next meeting of the Houston City Council will be April 12 at 6 p.m. The public is welcome to attend.