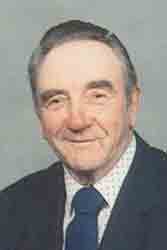 Odell was born January 24, 1932, to Clarence and Emma (Aasum) Iverson, on the family farm in Preble Township, Fillmore County, Minn.  He attended the Scheie School near the farm and then graduated from the Mabel High School.  He farmed for several years and then worked for Minnowa Construction until retiring. He lived on the farm until 2017 when he became a resident of Green Lea Senior Living in Mabel.  He was a member of the Scheie Lutheran Church and had served on church and cemetery boards. He enjoyed visiting with others, bowling, reading, and going to auctions.

Odell is survived by a sister Eleanore Iverson of Mabel, and a nephew Gary Casler of Rochester.  He was preceded in death by his parents, and a sister Ella Casler.

Funeral service was held 11 am, Tuesday, April 27, 2021, at the Scheie Lutheran Church in rural Mabel.  Burial will take place in the Scheie Cemetery.  Visitation was one hour prior to services at the service at the church.  The Mengis Funeral Home in Mabel assisted with arrangements.