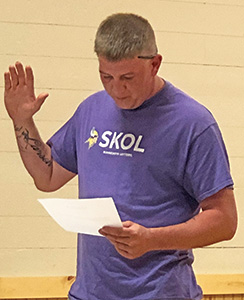 The Canton City Council meeting got a little hot last Wednesday, but not because the weather brought 90-degree weather to the area. The town hall got warm as council members voiced frustration over repeat offenders of the city’s nuisance ordinance. Clerk Brock Bergey explained that these issues not only costs the city a lot of money each year in court costs and legal fees, but also dominates staff time and time spent discussing these matters during each council meeting.

Each month, Bergey updates the council on “nuisance properties,” several being listed each month with various issues and legal statuses.

Bergey also stressed there are a lot of things happening with other properties in the community as well, but may not be mentioned at the meeting or in the report because issues may have been resolved or the status of the property has not changed.

He did note that he has located the owners of a neglected property and talked to one of them about the need to mow and clean up the lot. Jeremy and Crystal Scrabeck no longer live on the property, but Bergey did say he now has an address for them so the city can move forward with action to get the property cleaned up.

The individual Bergey talked with admitted they have not mowed the property, but were having trouble with their lawn mower.

The city could go in and mow the property and bill the property owners for doing so. The council agreed this might be the best action as they did not want to continue to have the grass and weeds grow because of it becoming a habitat for rodents and mosquitoes.

Another property discussed specifically at last Wednesday’s meeting was that owned by Danny Whalen. The council has cited Whalen in the past for ordinance violations and he was sentenced and on probation for a year. Bergey explained that Whalen’s probation had expired in February and he has “resorted to his old ways,” moving in multiple vehicles – many without license plates – and other debris.

Bergey and the council discussed the matter of erecting a fence around the Whalen property, but they fear setting a precedent for this action to deal with nuisance properties.

“We cannot set a precedent of building that guy a fence,” said Councilman Carl Ernst. “I don’t think we have any other option but to start the whole process again.”

Bergey said he had talked with Whalen just prior to Wednesday night’s meeting and he asked for a few more days to bring his property into compliance. Bergey said his understanding was that Whalen had lined up some help to get some of the vehicles and other junk moved off his lot.

Bergey also told the council he would like to talk to the county attorney, Brett Corson, regarding Whalen’s probation to see if it could be extended beyond a year’s time. It was noted that Whalen had been cited and sentenced on nuisance violations at least three times and yet he continues to be a habitual offender.

Since 2012, the city of Canton has spent $3,000 in prosecution fees for charges against Whalen. This does not include the costs of staff time or city attorney fees charged for dealing with this issue.

“I am very frustrated with this process,” Bergey said. “The amount of time I spend dealing with Danny is ridiculous.”

The city could start the process over once again, citing Whalen for his ordinance violations, going through the court process and once again having him on probation. However, based on past practices, once his probation expires, Whalen will once again start accumulating vehicles and junk. He has violated the nuisance ordinance for over two decades, with the city council and past clerks addressing those issues continuously.

“What are we trying to accomplish?” Bergey asked the council last Wednesday. “Are we trying to get Danny in compliance or do we want the downtown area to look better?”

The council and Bergey agreed that they need to think of some creative options to break the ineffective cycle they have been in with Whalen.

Recently, Bergey said he posed the question of erecting a fence to the Facebook world through his Feedback Friday post for the City of Canton. He said the responses had been split with about only 30% supporting that option, many saying it was simply a bandaid on a bigger problem and setting a dangerous precedent.

The city could also “give up” and stop fighting to bring Whalen into compliance. While this is not ideal, the city would no longer have the annual expense of legal fees dedicated to fighting Whalen and his property neglect. Just in 2020, Bergey said, the city spent $1,200 towards fighting Whalen’s violations.

Bergey admitted that part of the problem with dealing with Whalen is that Whalen knows it is not a “simple fix.”

“We can’t just evict someone from their property,” Bergey added. “We want it to look better and we are tired of going down this road.”

Councilman Randy Gossman said his fear would be a fence would only hide a growing problem. “He would likely haul in more stuff and pile it higher. We need to ask the public if they want to keep pouring money down this drain.”

Josh Nordsving, newly appointed to the council, said the city should go in and tow the extra vehicles away. Bergey said the city had looked into that as well, but the cost of storing the vehicles in a secure location would also be prohibitive.

Ernst also mentioned he was hesitant for the city to go onto the property to start cleaning something up due to possible contamination in the soil from working on vehicles over the past several decades.

The city could also pursue a civil case against Whalen, but there would be no way to assess those costs back to Whalen.

Ernst voiced his own frustration that whatever consequences Whalen has faced in the past just don’t have enough “bite” to them to prohibit Whalen from repeating his past hoarding behavior.

Gossman agreed, saying, “We’re just beating our heads against the wall and we have been for 10 years. I know none of the townspeople like it, but what choice do we have?”

“He has no civic pride in his community,” Bergey agreed. “Sadly, he finds it amusing. He simply doesn’t care.”

Gossman suggested involving the community in the next steps to fight this matter and thought a town meeting could help the council determine how the public feels about the money being spent on this continuous problem.

Bergey also said it would be good for updating the community on what can be done and what cannot be done to deal with issues like this.

After discussing the matter, the council agreed to set a town hall meeting for July and to discuss further options with the county attorney prior to that meeting.

The city council members reviewed six letters of interest from Canton residents interested in filling the open council position, created by the resignation of Charlie Warner at the May meeting.

The council members voted, by blind ballot, for their two top choices. Once the field was narrowed to two, the council once again voted for their top choice.

Upon that vote, Josh Nordsving was appointed to fill Warner’s council term, which runs through 2022. He also took the oath of office and began serving on the council immediately.

Nordsving can file for a full term in the November 2022 election for a four-year term beginning in January of 2023.

Bergey said, “I just want to say, it speaks volumes that there were six interested candidates to fill this seat.”

In old, unfinished business, the council reviewed drafts of amended ordinances that were discussed at the May meeting. The first had to do with recreational vehicle use in Canton and the second was regarding the planning and zoning commission.

The council approved the first amendment to the recreational and other vehicle ordinance to allow ATVs to be licensed and operated in the city limits.

While Ernst mentioned he would also like to see the mini-truck portion stricken from the ordinance, the council agreed to vote on the presented draft, which allows mini-trucks in town.

Bergey noted there are no mini-trucks licensed in Canton at this time.

Mayor Nick Prestby said, “I think it’s a waste of money to get the city attorney involved to create a new draft for a vehicle that isn’t even causing any trouble in town.”

The council also voted to approve a summary ordinance to be published in the local newspaper.

The draft of the new planning and zoning ordinance was also approved. The change includes a reduction of members from seven to three, implementing staggered terms, and outlines that meetings need to be held publicly, with proper notice, with minutes taken and approved to become a matter of public record.

The council also approved a summary publication of this newly adopted ordinance amendment.

In a discussion regarding the gazebo replacement, Gossman and Ernst again argued that the structure was sound and just needed a little “tender loving care.”

City staff pointed out there had been no maintenance on the structure and the council had discussed in the past that it was not worth maintaining. “You determined a metal structure would be a good way to go,” Bergey reminded them.

Because there had been little maintenance done on the gazebo, located on Main Street, Bergey said it is now becoming a safety concern.

He also noted $5,000 had been budgeted for the replacement.

After reviewing some of the design options for its replacement, the council discussed metal or vinyl options, but could not find an acceptable design they would like put in the current location.

Mayor Prestby ended up making a motion to take down the current gazebo and table the decision as to what will replace the structure until a later date. The council members concurred and the motion passed.

The council approved hiring Four Seasons Maintenance from Spring Grove for street improvement projects. They will repair a patch of intersection between ZZ Tap and the Pub as well as patch some potholes in town.

The council approved hiring Falck Concrete Construction from Decorah to do sidewalk repairs by the fire station, by Whalen’s property, by the post office and by the town hall. The concrete work would include a ramp to the back door of the town hall, which would increase accessibility to the building from the Canton Day Off festivities.

Reviewing the proposed bus shed repairs, Gossman noted that he didn’t personally think the city should spend any great deal of money on the repairs. “We can replace some boards on top, clean it up, do some landscaping. I think we can fix it up and make it look real nice for not a lot of money,” he said. The council members discussed creating new doors for the front and replacing a portion of rotten wood in the back with some new treated lumber.

Finally, the council discussed the issue of the number of feral cats roaming the city. The first recommendation the council members stressed to citizens is to stop feeding them. Ernst, who serves as the animal control officer, stressed that putting food out for cats, however well-intentioned, simply “rings the bell” to attract every other varmint in the area to come into town for a meal. He also noted he can live trap the cats and relocate them to a farm outside of town. The owners have agreed to accept any and all cats he traps. If residents in Canton have pet cats, it was encouraged to keep them inside or have them properly licensed to avoid having the pets accidentally relocated as well.