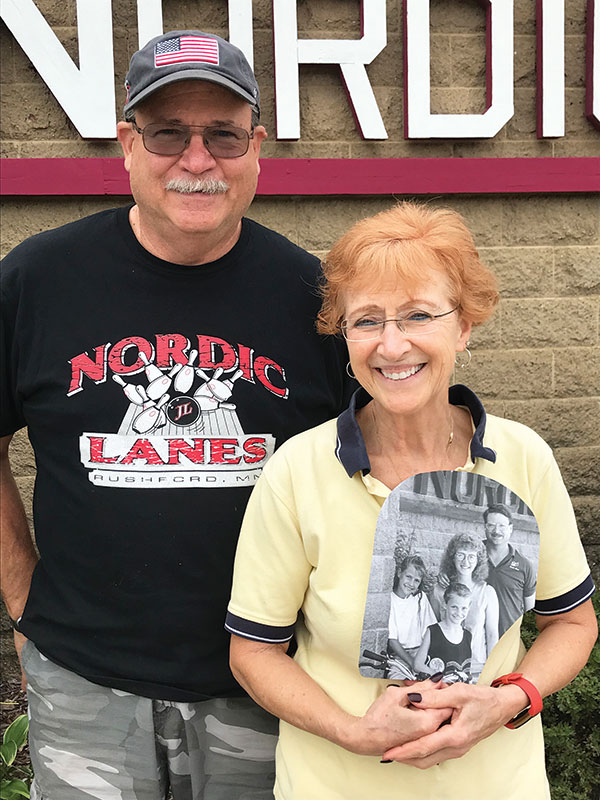 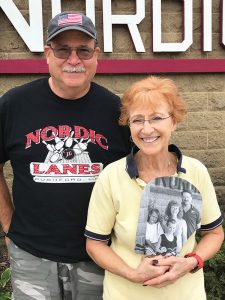 Thirty years ago, in 1991, Jim and Debbie Kitchens made the decision to purchase Nordic Lanes in Rushford. Jim made the move first from Alaska to Rushford while Debbie tied up loose ends in Alaska and followed later with their daughters Donata and Danielle. They had been looking for an empty building to buy for a bowling center in North Pole, Alaska, but even in the 1980s such buildings were running over a million dollars.

On October 1, 1991, They officially took over Nordic Lanes. While the building was good and solid, the bowling equipment needed work; Jim had worked on the same equipment when he ran the bowling center on the Air Force base in Alaska, so he was very familiar with it and went to work on it. Debbie and the girls joined Jim in Rushford the following May.

Jim knew that a bowling center needed to also serve food; before long, they were serving lunches, sandwiches, soups, burgers, and appetizers. At that point, Roger Chiglo still owned the Creamery next door. In 1995, the Kitchens negotiated with Chiglo to purchase the Creamery. Soon they added a thriving lunch business to their regular menu and began making multiple delivery runs to employees at the TRW plant.

According to Jim, the restaurant put the business over the top. The restaurant was now busy year round with regular food service and tourist traffic during the summer when the bowling center wasn’t busy, and then things got really busy when the bowling season and deer hunting started. They had been told that business would slow down at different times during the year, but they really haven’t seen that. The Creamery has in fact become a destination.

When asked what their biggest challenges over the 30 years have been, Jim said that initially it was to survive the first couple years with the bowling equipment needing repair, and getting food service going. He noted that just having a bar with a bowling center wouldn’t have been enough. Both Jim and Debbie were quick to reply that hiring enough workers has been a challenge since COVID. “Now people are able to get funds from other sources,” Jim wryly commented with a smirk.

Both Debbie’s grandmother and great-grandmother had run restaurants. Debbie knew full well the work and long hours required in the restaurant business. She quipped that she learned, “You never say, ‘I’ll never do something!’ ” She had previously declared she would never work in a restaurant, but has now done exactly that for the past 25 years.

When the flood waters of 2007 hit Rushford, the Kitchens saw a flood of volunteers as well. Debbie shared that she thinks very differently about the Red Cross and Salvation Army ever since and supports their efforts. Jim and Debbie considered not bringing the bowling alley back at that time, but, after some thought, they knew the community needed the bowling center. The only bowling centers in the area are in Preston, Winona, and Caledonia. They worked a deal with Brunswick and were able to get up and running again in February of 2008. First the bar was opened with limited food service; then, by February 2008, the dining area was once again opened in the Creamery. Soon an addition to the Creamery was built as well.

Debbie makes sure to prepare her famous desserts at the Creamery. Recent food additions have been a gluten-free cauliflower pizza with an oil-based sauce. The many flavors of ice cream have always drawn in the customers as have Debbie’s cheesecake and bread pudding. Debbie’s mother, Bea Fish, makes her roast beef and gravy sandwiches for special promotions, and a rib dinner highlights yet another promotion special.

Jim and Debbie had listed the bowling center and restaurant for sale hoping that it would remain a bowling center and restaurant, something the community needs. They are happy to announce that as of Tuesday, October 5, 2021, they have a deal in place to sell the business to Dean and Kim Mierau of Rushford. Their hope that someone local would buy the business and continue on with what they had worked so hard to establish over the years has been realized.

Currently the bowling center runs seven leagues. Both Jim and Debbie personally enjoy bowling. Jim noted that he still wants to get his 20 years in at Nationals, and Debbie claims she will quit bowling when her granddaughter gets to Nationals. (Both Jim and Bea chuckled unbelievingly at that!)

What both Jim and Debbie have enjoyed most has been all the people and friends they have met as proprietors of Nordic Lanes and Creamery. They shared that their family has been great to help out at the business, but no one wants to take over the business.

Jim has always been community minded; he served eight years on the school board and has driven school bus for 26 years. Debbie enjoys getting outside and working in the solitude of her yard in her spare time.

As far as future plans go for the couple, they would like to be able to jump in the car and go for a weekend. They want to be able to relax, be free, and enjoy life. “We’re ready for the next chapter of our lives; we don’t know when or what it’ll be,” Jim declared.