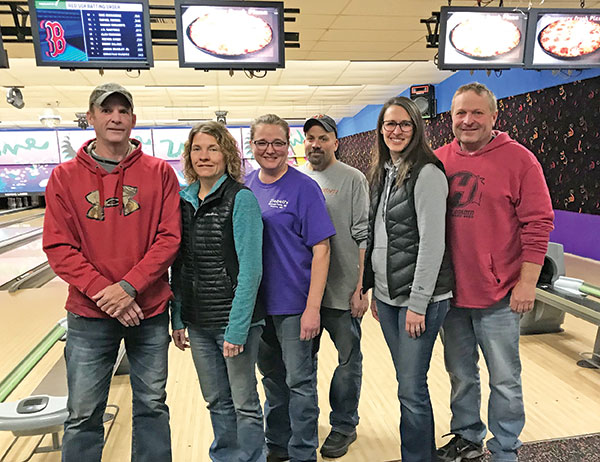 On April 1 Dean and Kim Mierau and Tony and Jessica Heiden officially opened the doors of The Creamery and Nordic Lanes in Rushford, as the new owners. Jessica quipped that April Fool’s Day was a good day to take over — if it didn’t work out, they could just say it was all a joke.

The couples are not going to be claiming it was a joke; they are off to a great start in their first couple weeks of ownership. Their recent Easter brunch was a huge success. At first they had been anticipating 50 to 100 guests; in the end, they had 225 reservations along with more walk-ins. According to the Heidens and Mireaus, they had 30 some people including their families working that day to make it a success. They’ve received great feedback from customers from that day.

Shawn and Shelby Martin had been booked for musical entertainment at the Easter brunch. When Shelby suddenly passed away the week before, Shawn insisted on helping to line up another couple, Joe and Jackie Cody, to entertain the crowd. Dean Mireau called their music “phenomenal.” According to Dean, the overall community support of the businesses has been great.

Originally the Mireaus were supposed to close on the businesses in January. They had reached a verbal agreement with the Kitchens on the purchase less than a day before the Kitchens were due to sign a purchase agreement with Dollar General. Dean commented that they just didn’t want to see it become a Dollar General. He also mentioned that his uncle, John Brand was one of the original partners when the bowling center was first built.

In January, one of the head Creamery cooks, Daren Chambers, had chosen to retire and move to Texas. Between that and the realization of the multitude of  moving parts of the businesses, the Mireaus and Kitchens decided to postpone the transfer until after the completion of the bowling season.

Tony and Jessica Heiden decided to join the Mireaus in the venture. When asked why, Tony declared, “It’s just another adventure and you couldn’t get better people to partner with.”

When asked how they all got along on decision making, Tony replied, “We agree on the same vision and direction on every subject.”

All four of the owners continue to work their other jobs. Dean will be retiring from the service in July or August; Kim is a nurse at Valley View Healthcare and Rehab in Houston. Tony is a full-time farmer while Jessica, in addition to being a farm wife, is a partner in Hart Country Meats.

The four are dividing duties informally with Dean and Tony answering staff questions, Jessica doing social media and some of the computer work while Kim fills in wherever needed, including the kitchen. Kim shared, “I enjoy being back there!”

John and Jeanna Ellinghuysen are the new “Jim and Debbie” according to the owners and have been hired to manage the two businesses. The Ellinghuysens are former dairy farmers whose work ethics are “unbelievable” to quote Dean Mireau. He enthuses that John and Jeanna are great with the staff. Jeanna has worked in food services at the Silo Immanuel Lutheran School and has had other food kitchen experience, but has never worked full time in a restaurant. At this time both John and Jeanna are busy learning the kitchen and restaurant. Later, John will transition to the bowling center portion of the business.

The Mireaus and Heidens do not plan on making any large changes. Tony explained, “Everything was going well — we wouldn’t want to screw it up!”

While not having any large concerns about the business, Dean noted the rising costs of supplies. “We are trying to keep it economical and use local sources as much as possible. They hope to team with local businesses such as Grandpa Don’s, Metz’s Hartland Dairy, Featherstone, and possibly Sno Pac as time goes on.

Some changes that have been made are the Military Mondays when retired and active military personnel can get a free drink and the addition of new wraps on the menu. Gabe Mireau, Dean and Kim’s son, has created BLT, chicken ranch, and spicy buffalo chicken wraps. Rumor has it that Gabe has a taco wrap and a fish wrap coming soon. There will also be other promotions in the future.

As far as summer volleyball and the future bowling season, plans are to continue as before. A kids bowl free program will take place once again this summer.

The foursome noted that all of their families have been super supportive of the venture. In addition to Gabe, Kim and Dean have three more children, Cayle, Gunnar, and Chason. Tony and Jessica also have four — Emma, Kail, Archer, and Jora. Emma has just started cooking in the Creamery kitchen.

Along with appreciating all the work John and Jeanna Ellinghuysen do, the owners said they consider themselves fortunate to have Jeff Laumb managing the bar.

The Kitchens and their entire family have been very supportive during the transition. Jim and Debbie have been told they are welcome to come in any time — in fact they’ve been teased that they needn’t bother turning in their keys!

Jessica explained that their goal is to keep bringing customers back by having them enjoy their experience at the Creamery and Nordic Lanes. She emphasized that they want it to be a fun place to work as well. Dean noted that they want to build redundancy for all positions so business can carry on whenever anyone’s absent for any reason.

Dean, Kim, Tony, and Jessica look forward to greeting old and new customers to the Creamery and Nordic Lanes. Be sure to visit them and come back again and again! You can look them up at nordiclanescreamery.wixsite.com/nordiclanes or give them a call at (507) 864-7799. They are open daily.