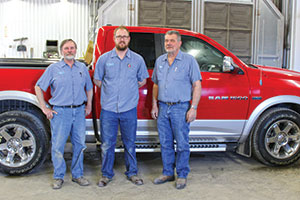 “Business ownership was kind of always in the back of my mind as something I wanted to do,” Greg Melartin said. Melartin recently purchased Matt’s Body Shop and Tire Service in Spring Valley and fulfilled his dream of owning his own business.

It started back in the fall of 2020 when Melartin stopped into the body shop for some business and noticed a “For Sale” sign. He didn’t have an interest in purchasing it, but asked about the sign while making small talk and was told that they were selling the entire business and retiring. Something about the conversation stuck with him and several nights later, he couldn’t sleep thinking about the body shop and how it would be a good fit for him. He started looking into the specifics of owning and operating Matt’s Body Shop and was even able to spend about six weeks hanging out at the shop to see how things were run. While he was in the process of lining up financing at the bank, the nerves set in, but his boss at the time had some wise words for him. “He said, ‘If you’re not nervous, than you’re dumb,’” Melartin commented, laughing.

On March 1, Melartin officially took over Matt’s Body Shop. Former owners, Dave Blazing and Chris Czapiewski agreed to stay on for a while and help Melartin get the hang of things. “That was a big pull for purchasing,” he said, explaining that he appreciates being able to learn from them.

Matt’s Body Shop and Tire Service was named by and for the original owner, Matt Pavlisch and Melartin has no plans to change it. Dave Blazing and Chris Czapiewski worked for Pavlisch for 20 years and, after he passed away, they bought the shop and ran it together for another 20 years. Now that Melartin owns it, he sees finding replacements for Blazing and Czapiewski as his biggest challenge. “At some point, they’re going to completely retire,” he said.

“We were hoping to find someone who would keep it running just the way it was,” Czapiewski said. He and Blazing were happy to find someone interested in the shop as a turnkey business. “It’s been in town since 1961,” he said. “The city of Spring Valley would have missed a business like this.” Blazing is confident that once he and Czapiewski officially retire, Melartin will keep things running well. “Greg’s a nice guy,” he said. “I think he’ll do fine.”

Melartin may not have operated or worked at a body shop before, but he does have some experience that he feels will be helpful in his new venture. His time in the military taught him how to be a leader and he also used to paint cars both before and after his deployments. He has always liked cars and is currently building one from the ground up. When Melartin left the military, he actually considered opening a car painting business, but he received some job offers in the security field and ended up going in that direction instead.

Melartin doesn’t have any big changes planned for Matt’s Body Shop and will continue to do the same quality work, offering body work, tires, and light mechanical work with an emphasis on treating all customers like family. In a 2001 newspaper article written when Blazing and Czapiewski bought the shop, they noted they would keep doing as much business locally as they could just as Pavlisch did and Melartin wants to carry on that legacy. “If we need to buy coffee, we’ll buy it at Sunshine (Foods),” he said. “It’s good to rely on one another because when the day is done, that’s all we can do.”

It’s been a few weeks since Melartin took over Matt’s Body Shop and so far, it’s been going smoothly. “It’s a fully functioning turnkey business that is profitable and serves the community extremely well,” he said. “We’re here to stay.”