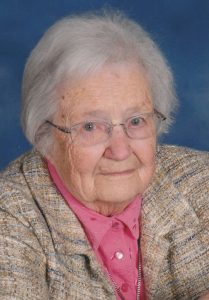 Myrna Annette Storhoff was born at the family farm in rural Lanesboro on September 4, 1921, to Alvin and Alma (Bremseth) Storhoff. After her mother’s death in 1924, Myrna was raised by extended family until 1926 when her great-aunt and uncle, Dorothea and Lauritz Olstad (“Auntie and Lars”), became her full-time caregivers. Myrna attended school at the O’Hara County School and Lanesboro Public School before becoming a student at Preston Public School where she graduated in 1939. She attended the Kahler School of Nursing, graduating as an RN in 1944.

On November 12, 1942, Myrna married her childhood friend and sweetheart, Frank Little. Over the next 66 years, their friendship and love continued to grow. After the war, Myrna worked briefly as a nurse in Preston before “retiring” to raise her family in Fountain. For the next 25 years, Frank and Myrna ran the Standard Filling Station, raised and sold sheep, Frank became the rural letter carrier, and they were blessed with four boys, Terry, James, David, and Paul. Myrna’s time was spent cooking, making clothes, helping on the farm, church activities, and everything involved in keeping up a house filled with five males.

In 1970, Frank and Myrna took over the Fountain Variety Store until 1972 when Myrna began working as a clerk for the Fountain Post Office, and in 1977 became the Postmaster, working side by side with her husband who was the rural letter carrier, until their retirement in 1986.

Myrna enjoyed traveling with Frank in the RV, neighborhood picnics, visiting, singing, playing piano (including piano/organ duets with Donna Rustad), bowling, baking, sewing clothing and quilts, needlework, reading, word puzzles, and helping with church activities. (She rolled her last meatballs at age 97.) She was a member of Fountain Lutheran Church since 1932, active in its choir for over 60 years, a member of the Ladies Aid/WELCA and the quilting group. She was a longtime member of the Fountain Study Club, Fountain Auxiliary, and Sweet Adelines women’s barbershop group.

Most of all, Myrna loved spending time with her sons and their wives, her grandchildren and great-grandchildren, extended family, and many, many friends.

Myrna lived a life of faith filled with compassion, caring, service, and love.

A memorial service will be set for early summer.