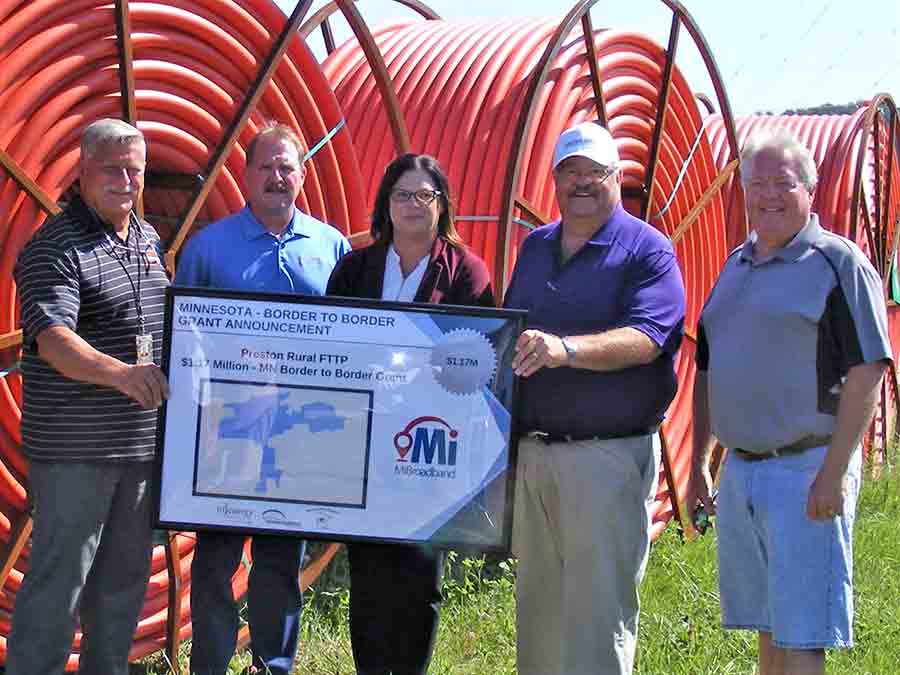 A groundbreaking event was held on July 18 to announce two broadband projects, one in rural Fillmore County and one in Howard/Chickasaw Counties in Iowa.

MiBroadband was awarded a $1.1 million grant in 2021 from the Minnesota Department of Employment and Economic Development (DEED) Border-to-Border Grant. The grant and a $2.1 million local match will be used to upgrade internet service for 257 rural locations in the rural Preston area in southern Fillmore County.

Jill Huffman, MiBroadband CEO and Harmony Telephone Company COO, stated a partnership between the state, county, and the city of Preston will allow fiber to be brought to the rural Preston area. Bringing fiber to rural areas is especially expensive due to low population density. Utilities construction contractor MP Nexlevel and Finley Engineering & Consulting will be working to make broadband in this rural area a reality.

Fiber will bring fast, reliable internet service. Huffman added that they “will bring local customer service to help set up wireless networks to allow for telecommuting, real-time video monitoring of property and equipment, and viewing of streaming services.” Many in the Preston rural area have limited options for service currently. The availability of the upgraded service (speeds of 1 Gbps download and 1 Gbps upload on a fiber network) will be of benefit to residents, farmers, and businesses in this area. Construction is to be completed this year.

Huffman reported construction has also started in rural Howard County, Iowa. A federal USDA ReConnect Program grant/loan totally $9.7 million (50% grant and 50% loan) was awarded to Harmony Telephone in the fall of 2020. This funding will be used to connect 538 locations with high-speed broadband in Howard and Chickasaw Counties. This construction is to be completed this year.

The Minnesota Border-to-Border Broadband Development Grant Program was created by the legislature in 2014. This program provides a financial resource to help telecommunication providers with their investment in building broadband infrastructure into underserved or unserved areas of the state.

The program was recently given a boost when it was announced that the U.S. Treasury has authorized $68.4 million in federal funds to be used in support of and to expand the Minnesota Border-to-Border Grant program. This funding will prioritize the building of broadband infrastructure in rural areas. Grants can cover up to 50% of construction costs in rural areas. Tens of thousands of Minnesota’s rural residents still do not have access to high-speed internet.

Additional federal funding ($100 million) will be available for each state to build out broadband infrastructure. The funds are part of the funding from the Infrastructure Investment & Jobs Act passed by congress last year.

There are still significant needs in Fillmore County for residents and businesses. Huffman has stated that it can cost as much as $5,000 per household in low density areas for fiber infrastructure. The return on investment for providers is very long term. Northern and western portions of Fillmore County have limited household density.

Fixed wireless does provide good service in parts of the county, but it is limited by hills and trees.

DEED reports that 64.85% of Fillmore County residents have the availability of at least 100 Mbps download/20 Mbps upload speeds.

According to a 2022 provider service inventory from DEED much of eastern Fillmore County (including the cities of Lanesboro, Rushford, Mabel, and Harmony and rural surrounding areas) have wireline broadband service of at least 100M/20M.

The western two-thirds of Fillmore County still has large rural areas that are considered unserved (no wireline broadband). Exceptions include the cities of Chatfield, Fountain, Preston, and Spring Valley which have good service.

Underserved areas include the cities of Ostrander and Wykoff and the areas surrounding those cities, the area around Peterson to the Winona County line and south of Peterson, and the area north and east of Canton.