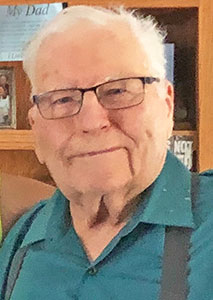 Marlo LaVern Dornink, 85, of Rochester, Minn., went to his heavenly home to be with His Lord and Savior Jesus Christ on April 21, 2021. He was surrounded by his loving family at home. Marlo was born on August 14, 1935, to Marvin and Jessie Dornink in Cresco, Iowa. He was raised on the family farm near Greenleafton, Minn. He graduated from Preston High School in 1953 and chose to enlist in the United States Air Force. He completed basic training at Lackland Air Force Base in Texas. He finished tech school at Scott Air Force Base in Illinois and returned to Minnesota to marry his sweetheart, Alice Eileen Olson, on December 18, 1954. The newlyweds moved to his new station at Turner Air Force Base in Georgia. There, they welcomed their first son Gregory. When Marlo’s father unexpectedly passed away in 1957, he received an honorable discharge and returned to Minnesota to care for his family’s farm.

Marlo and Alice had six children in eight years, affectionately called “The 6 Gs.” Marlo was eager to try new farming methods and was an innovator in the farming community. He was passionate about being a good steward of the land and led by example.

Marlo supported his children and later his many grandchildren in their sporting endeavors, concerts, and performances. He took time to attend their events and celebrate their accomplishments. He was a father figure and a substitute dad to many who did not have a father in their lives. He always made time for anyone who needed his help or love.

He and Alice attended Rhema Bible Training Center in Tulsa, Okla.; he graduated in 1993. They moved back to Minnesota, and he became an active member of his local church and was a faithful volunteer who served in the Helps ministry. For 21 years he was a special needs bus driver for children in Rochester and the children loved him. He also volunteered as a mentor for Minnesota Adult & Teen Challenge.

Marlo was willing to learn and experiment with the changing forms of technology. He was determined to learn how to navigate the internet on his home computer with the help of his grandchildren.

Marlo loved company and welcomed everyone with a hug and a cup of coffee. He was also known for his funny one-liners and his breakfast shakes. He left a legacy of faith in God, love of God’s Word, faithfulness to his wife, and a strong work ethic. He cared deeply for his family and they were his priority. He will be greatly missed.

Marlo is survived by his wife of 66 years, Alice; and his six children: Greg (Cheryl) Dornink, Gwen (Patrick) Hamilton, Geffrey (Nancy) Dornink, Glori (Robert) Abeyta, Gene (Vicky) Dornink, and Gordon (Linda) Dornink; his 36 grandchildren, and his 39 great-grandchildren (with five more on the way).

He is preceded in death by his infant sister Evelyn Dornink, parents Marvin and Jessie Dornink, brothers- and sisters-in-law Elden and Alma Dornink and Verlyn and June Dornink, sister Betty Burreson and granddaughter Dianna (Dornink) Fleshman

In lieu of flowers or gifts, please send memorials to Hindt Funeral Home in Spring Valley, Minn., in care of Alice Dornink. There will be a celebration of life service held at High Point Church, 4545 N Frontage Rd, Rochester, Minn. 55901, at 3 p.m. on Sunday, May 2, 2021. Burial took place at the Minnesota State Veterans Cemetery in Preston, Minn.