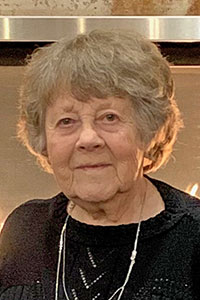 Lorraine Marie (Olson) Lange died peacefully at her home on July 18, 2021. Lorraine was born on April 17, 1934, to Alfred and Jennie Olson. She had one sister, Juliette (Olson) Campbell who she dearly loved. Lorraine was baptized at Union Prairie Church in rural Lanesboro. As a child Lorraine attended Clear Grit country school. Upon moving to town she attended the Lanesboro School, and graduated in 1952. On September 7, 1952, Lorraine married Manley William Lange at the Bethlehem Lutheran Church in Lanesboro, the church where she had been confirmed. They went on to celebrate 65 years of marriage.

Upon her marriage Lorraine became a member of the Big Springs Church near their home. She was active in Circle, and all the church activities. She was also a member of a homemakers group in rural Harmony.

Lorraine made her life with Manley on the Lange home farm. She raised her children, and went on to open her home to her grandchildren and great-grandchildren in many beautiful ways. Lorraine cooked for her family and extended family, but also for many hired men and whoever turned up to be fed. The grandchildren knew where the cookie cupboard was and no one wanted for nourishment in her presence. Although recipe books abound, it is doubtful anyone can duplicate her most special recipes!

Lorraine and Manley enjoyed taking trips with their children as they were growing up.  They made many special friends through RENK seed, whom they traveled with on several vacations.

In September of 2017 an anniversary party was held to celebrate 65 years of marriage. Manley passed away on March 1, 2018. Lorraine continued in her strong and persevering way, remaining active and finding joy in her family.

She was preceded in death by her husband Manley, her parents, her sister Juliette and many brothers- and sisters-in-law.

Lorraine will be greatly missed by those who called her mother, grandma, great-grandma and friend.

Funeral services will be held at 11 a.m. on Saturday, July 24, 2021, at St Matthew’s Lutheran Church in Granger.  Visitation will be one hour prior to services at the church.  Graveside services will follow beginning at 1 p.m. at Big Springs Cemetery in rural Harmony, Minn.  Lindstrom Funeral Home is assisting the family with services.