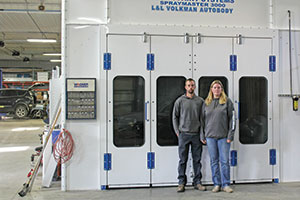 Leigh and Kayla Volkman owned and operated L&L Volkman Auto Body Repair in Rushford for four and a half years before an opportunity came up that they couldn’t turn down. They had been discussing the possibility of moving their business to a better location for some time and were thinking about building, but when they heard that a place was for sale in Rushford, their plans changed. “It was a perfect fit for us, building-size wise and location,” Leigh explained. “We originally wanted to build a new shop, but it was easier for us to buy out an existing business and operate that way.”

The Volkmans, who both grew up in Rushford and still live there with their three children, purchased the auto body repair business from Larry Dahl in 2015 and changed the name from Dahl’s Auto to L&L Volkman Auto Body Repair. Leigh had worked for Dahl in the past before going into a different career field. When he heard that Dahl was selling the business, he figured that it was time for a change. “We decided we wanted to head in that direction,” he said.

The original location of the auto body repair business was off the main road and could be difficult to find if a customer hadn’t been there before. In addition to wanting more visibility, Leigh and Kayla were also hoping to get into semi repairs and heavy truck painting. When the building at 905 Enterprise Drive in Rushford came up for sale, they realized that it fit their needs perfectly. It sits just off of Highway 43 and is easily visible from the main road as well as being big enough to allow their business to grow. “In this building, we can handle much larger vehicles,” Leigh explained.

There wasn’t much work that needed to be done when the Volkmans moved into their new location. They put in a painting booth as well as new bathrooms and changed the heating system. “For the most part, the building fit our needs really well,” Leigh said. They and their three full-time employees are now able to handle up to 20 car repairs at a time while before they could only do seven, which just wasn’t enough. “It seems like everyone gets in accidents at the same time,” Leigh said, chuckling. The larger space makes it easier to get through more vehicle repairs each day since they’re all inside the shop. They also have a dedicated stall just for truck and semi work. Customers had been asking about truck repairs for a while, but in the previous location, they were unable to do more than minimal work.

Leigh and Kayla moved to the new building on November 1. They haven’t had a huge increase in business yet, but are confident that it will come. “People are getting used to the location,” Leigh explained, adding that they have already gotten a few customers who saw their sign from the road and stopped in for repairs. “It should work out the way we hope it does,” Leigh said.