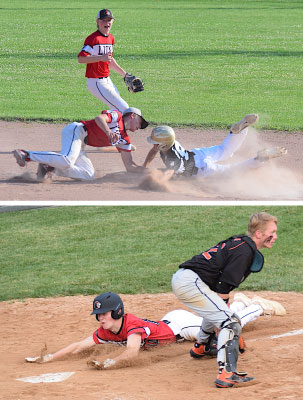 Trailing by four runs and only one out away from what seemed like certain defeat, the Spring Grove Legion lads (ages 19 & under) staged a most-improbable five -run rally to overtake visiting St. Charles, 6-5, on July 8. It was a solemn bunch of Saints who watched in stunned silence as the delirious Lion squad streamed into right field in pursuit of sprinting Logan Brumm, who had just doubled home the winning run. Spring Grove improved to 2-4.

There was also no dearth of drama for the Junior Legion Lions (16 &under), who went three hours and three extra innings before suffering a walk-off loss by the same 6-5 score at Caledonia on July 5. After that season-opening setback, that younger Spring Grove squad swept a home double header with Lewiston on July 10. The Lions quelled a late Lewiston rally to take the morning game, 8-7, before a 3-1 decision in the afternoon.

In the case of the young Spring Grove roster, only two Legion Lions are too old to play in Junior Legion games. A few are also young enough to play on the 14 & under team and even on the Little League squad (7th grade & under).

Down by two runs and one strike away from defeat, the Lions received a two-RBI double from Isaac Griffin to tie the score. Griffin would score the winning run when Logan Brumm delivered a walk-off double.

Spring Grove, which had gone without a base hit through the first four innings and had managed only three hits heading into the final half-inning, came through with six hits – including all three doubles – in their last chance at the plate. Ty Cleven and Zach Brumm opened with back-to-back singles, but any faint hopes plummeted after a line-out and a ground out, both to third base.

But then Caleb Griffin doubled home both Cleven and Brumm to make it 5-3. The Lions had suddenly achieved some scoring success, but there were still two outs. But then a Nathan Solberg single sent Caleb to third base. But there were still two outs. The Lions were one strike away from disappointment when Isaac Griffin sent the ball deep into an outfield gap and sent both his brother and a stomach-sliding Solberg across home plate to tie the score.

A four-run deficit had been erased, and the potential winning run was in scoring position. But there were still two outs. Saint starter Carter Mathison, who had been in complete control for six innings, left the mound as reliever Dustin Zillmer came in to quell the uprising. Four pitches later, Logan Brumm walloped the game-winner into another outfield gap and then attempted to escape before being mobbed in right field.

Spring Grove starter Isaac Griffin went the distance, striking out four times as many batters (12) as he walked (3), but he would not have been the winning pitcher if not for his two-bag blast with the bat. Griffin allowed eight hits, but never more than two in any inning.

Mathison would take the pitching loss, despite walking only one batter. That free pass had come early, to the second Spring Grove batter of the game (Solberg) after the first batter (Caleb Griffin) had reached base on an error, stole second base and advanced to third on a passed ball. The threat ended with a double play, line-drive back to Mathison on the mound.

After the first two Spring Grove batters had reached base, Mathison retired the next 12 batters in order while the Saints moved ahead on the scoreboard, 4-0. Both Harper Schaber (RBI) and Vance Fuller (2 RBI) batted 2 for 3 for St. Charles. All of the Saints’ eight hits were singles.

After Cleven spoiled the no-hitter in the fifth inning. the Lions averted a shutout with an unearned run in the sixth inning with a St. Charles error and singles from Solberg (2 for 3) and Isaac Griffin (2 for 4). Griffin struck out the side in the top of the final seventh inning, but the Saints still led 5-1 as the Lions came to bat for the final time.

Until that unexpected, frantic finish, the Lion highlights had been two quality catches in right field by seventh grader Gabe Klug. His sliding grab in the fourth inning had prevented at least one run, probably two, when the Saints already led 4-0.

It took over three hours and 10 innings to conclude a scheduled seven-inning contest on July 5 at Caledonia. After the Lions had forced extra innings with Ty Cleven drawing a bases-loaded walk, the game would eventually end with a walk-off, bases-loaded walk.

Despite striking out 18 times, the Lions led 4-1 in the fifth inning, then fell behind by a run before tying the score at 5-5 in the top of the seventh. But they would not score during the final three extra innings against Warrior reliever Drew Jahnke (2 hits, 6 strikeouts, 2 walks). Caledonia starter Hunter Goetzinger had fanned a dozen batters while walking four and hitting two others.

The Spring Grove defense was exemplary while turning three double plays, and catcher Logan Brumm threw out two runners attempting to swipe second base. There was one of Zach Brumm’s signature sliding catches in centerfield along with well executed fielding plays by both pitchers, Cleven and Nathan Solberg. However, the Lions committed four errors, three of which figured into the last three Caledonia runs. The winning run came with a walk, an error and a hit batter before the game-ending walk.

The Warriors committed only one error, but it led to a pair of unearned runs as the Lions moved ahead 4-1. Both teams had three earned runs. Both squads had six singles, but the Warriors had the lone extra-base hit – a two-RBI double from Jordan Tornstrom that drove in the tying and go-ahead runs in the bottom of the sixth. Lion lead-off batter Caleb Griffin (2 for 2) did his job by reaching base on all five plate appearances (2 hits, 3 walks). Logan Brumm (2 for 4) also had two hits.

The lead changed hands three times in the first three innings. Leading 5-4, the Lions scored three to create an 8-4 cushion, heading into the final seventh inning. But Lewiston also added three to get within a run again before the game ended with a bases-loaded strikeout.

For Spring Grove, Brandon Jahnke (triple) and Logan Brumm each batted 3 for 4 with 3 RBI. Ty Cleven (double), Caleb Griffin (3 steals) and Nathan Solberg each went 2 for 4. The Lions out-hit the Swarm 13 to 6, but the visitors benefited from 14 free passes (10 walks, 4 hit batters). However, both Grove pitchers combined for 15 strikeouts (among a total of 21 outs). Starter Jaxon Strinmoen fanned 10 batters while picking up the pitching win. Solberg earned the save by striking out five in only two innings of relief.

It was a tough result for Swarm pitcher Nolan Oslie, who went the distance while walking only one batter and hitting one while recording five strikeouts. The Lewiston defense turned two line-drive double plays.

Caleb Griffin batted 3 for 3 with a pair of doubles, drove in two runs, scored one run and had the Lions’ defensive play of the game with a diving stop at second base before throwing out the runner at first.

Each team had one earned run, but Spring Grove scored two unearned runs in the second inning to take an early 3-0 lead. The Lions had only three hits while going scoreless during the final four innings. Lewiston pitcher Eli Jensen struck out 12 Spring Grove batters while walking only one.

The Lions again out-hit the visitors – this time 7 to 3. But again, the hometown hurlers were quite charitable – walking eight batters and hitting three. But the two Lion pitchers compensated by striking out 10 visiting batters. Starter Ty Cleven got the win; Nathan Solberg, for the second time on the same day, was credited with the save.

Two of the Swarm’s three hits were doubles, but all three hits came in different innings. Lewiston, which left 12 runners on base, did not score until the sixth inning. Two walks, a hit batter and a fielders choice set up a bases-loaded RBI single.