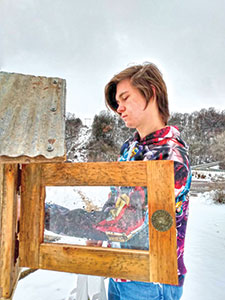 Determination, ambition and love of learning are three of the many characteristics of anyone who has worked their way up from entering Cub Scouts, moved their way on to Boy Scouts and then continues on even further to work toward becoming an Eagle Scout.

Robert Lieb, 18, of Lanesboro, Minn., not only maintains these characteristics, but they are combined with numerous other traits that make up who this fine young man is at this point in his life, but these qualities will certainly contribute to the man he is becoming.

Lieb has been involved in Scouting since he was in kindergarten, and he enjoys many different aspects of being involved in the organization.

After completing Cub Scouts through a Winona Cub Scout troop, Lieb was looking for a Boy Scout troop to join.  His mom, Stena, was fortunate to find a troop that was just starting up, Troop 67, with Ronald Gregg as Scout Master.

Eventually, Lieb joined Troop 49 in Lanesboro, where he has continued his enthusiasm for Boy Scouts.  Lieb’s father, Andy, became the leader of Troop 49 a few years ago.  The troop would normally meet in the upstairs of the Lanesboro American Legion on Monday nights, although that has not been happening in recent months due to the pandemic.

When asked if he likes having his dad as the troop leader, Lieb replied, “I like it because he is active and interested in the troop” and finds creative projects and adventures for the troop.

Lieb says he was drawn to Scouting because of all it has to offer.  “In general I’ve always liked having fun camping, exploring and hanging out with the other Scouts,” Lieb states.

Lieb has some memorable moments from Scouting and earning badges.  “My ‘15 patch from Many Point, it was our first long term camping experience and I have a lot of fond memories from that week,” Lieb says.

“Another would be my Life Guard patch from when I was doing my Counselor In Training (CIT) up at Many Point.  I’ve never been the most confident swimmer but I did all the requirements first try, it was also my longest time camping as CIT is a five-week long program and was so much fun,” recalls Lieb.

“Another is my first merit badge I earned, it was Emergency Prep and it was a while to actually get the badge because I had not earned my first aid merit badge,” says Lieb.

Lieb’s project to earn Eagle Scout was to build two mini free libraries and install them in Lanesboro.

This included “planning and overseeing the construction and installation as well as all the pre-planning for the project,” explained Lieb.

“It seemed like a project that made sense to do for me,” noted Lieb, as many community members will take advantage of the free mini libraries and their offerings.

Lieb put in quite a few hours of work to complete the little libraries and then install them.  He approximates that he spent two hours on planning the project and a total of eight hours building and installing the mini libraries.

One of Lieb’s mini libraries is located by the Bass Pond in Lanesboro, which is a nice location for people to pull into the parking lot and see what the mini library has in stock.  The second little library was installed by the trail head in Lanesboro where many residents and visitors frequent.

“They seemed like they would fit nicely in those spots and get lots of traffic there,” notes Lieb.

Leadership seems to be in Lieb’s genes and he is considering becoming a troop leader himself.  “I probably will since when I turned 18 I can no longer advance rank-wise nor get more merit badges, but I still can go camping and hang out with my friends in Scouting and show the younger Scouts skills they will need in Scouting and later in life,” comments Lieb.

Lieb is deciding on where life will take him next, as he considers going to trade school.  No matter what Lieb decides to do after high school, it is no doubt he will do it to the best of his ability.