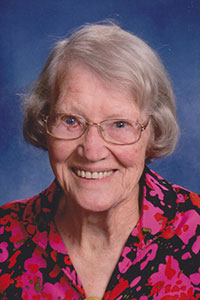 Laurel E. Norman, of Spring Valley, Minn., passed away on Wednesday, September 30, 2020, at Ostrander Care & Rehab in Ostrander, Minn. She was 100 years and two months old. To live to be 100 was a goal she had in her later years and not so later years.

Laurel Eldora McNee was born in Etna, Minn., on July 7, 1920, to Jim and Janie (Ostrander) McNee. She graduated from high school having boarded in town from the age of 14, coming home every once in a while. She went on to graduate from college in Winona, Minn., with a business degree. Her mother also graduated from college and taught school. There in Winona, she met Martin Norman. They were united in marriage at Etna Church on January 18, 1941, the iciest day of the winter. Martin’s family came down from Winona on roads deemed impossible to travel on. Together they raised four children: Eldora, Paul, Bruce, and Loris. At the time of Martin’s death, they had been married for 48 years.

Laurel lived in Spring Valley area all her life. She did several volunteer jobs including Girl Scouts, church, 4-H, and also tutored students that were having a hard time in school. She used fun things to teach math, such as shark teeth. She loved playing the carillon for Spring Valley’s special days. Laurel worked at the Spring Valley Historical Society Museum and knitted baby items for the “Bundles of Love.” In between her busy times she had her flowers, a garden, a few chickens, some cats, and her dairy goats. For several summers, the family dressed out 1,500 chickens to sell on the streets of town and to customers that ordered them. After Laurel and Martin moved closer to town, she added eggs and berries to her street sales. If you were lucky and saw her early, she may have had a couple sweet rolls or buns with her. She made her biscuits for many occasions – graduations, weddings, church fundraisers, and family reunions. Laurel was especially surprised and very happy when some of her bread went for $30 a loaf, her buns brought the same price. She said that she never would have been able to afford to give the church the $170 her bread made that day for the church’s fall fundraiser. Laurel also husked corn in competitions at the state and national levels. She was a lady that had a smile and a good thing to say about everyone. She will be greatly missed.

She was preceded in death by her parents, husband of 48 years, Martin, sister Arlene and brother Leon.

Memorial services for Laurel will be held at 1:30 p.m. on Saturday, October 17, 2020, at Faith United Methodist Church in Spring Valley, with Pastor Mark Woodward officiating. Due to COVID-19 regulations, masks are required and social distancing will be practiced.

In lieu of flowers, memorials may be sent to the Fillmore County History Center & Genealogy Library at 202 County Road 8 and Highway 52 in Fountain, Minn. 55935.