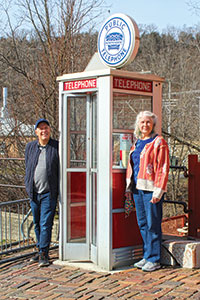 It’s been a great 10 years, but Sandy Webb is ready for retirement. Webb started working at the Lanesboro Historical Museum in 2011 and became the director just one year later. Now, she’s turning the reins over to Dan Rooney, who was recently hired as the new museum director.

Webb moved to Lanesboro from New Mexico in 2010, but her roots are in the Midwest. “I felt like I was coming home when we came here,” she said. “I wanted to feel connected to the community and the museum was a good way. I’m one in a long line of people who love the museum.” Webb will admit that when she first started working at the museum, she knew nothing about the history of Lanesboro, but it didn’t take her long to learn. When people would come into the museum with questions, she would learn right alongside them, making connections and learning names. “It’s one of those places where you learn by doing,” she said.

Webb, a former educator, worked to make the museum accessible to children and get them interested in history. She’s very proud of how the museum is focused on not just showing artifacts, but telling the stories behind them and making history come alive. “It’s a place that is holding and telling Lanesboro’s story, but mostly from the perspective of the people, and that’s really rewarding,” she said.

Webb has done some amazing things for the museum during her time there, one of which was the creation of a database. “I realized that in order to make it accessible, we needed to be able to locate all the items in the museum.” Thanks to a number of grants that she wrote over the years and taxpayer support, Webb was able to work with the other museum employees and volunteers to create a digital database of the various artifacts and photos in the museum. As of now, a total of 85-90% of the museum’s items have been entered, which makes it easier for people to ask for specific information about their ancestors. “It’s a huge boon to researchers and family.”

Webb may be retiring from her job as the director, but she’ll be around to answer any questions that Rooney might have as he takes over. As of now, she is finishing several projects at the museum so she’s still there frequently, but she is making it clear that Rooney is in charge and is excited to watch him grow in his new position. “He’s going to take it in a direction that’s commensurate with his skills and it will be fun to watch that happen,” she said.

Dan Rooney, a recently retired teacher at Western Technical College in La Crosse, has been visiting Lanesboro with his wife Brenda for the past 30 years to enjoy the bike trails and theatre. Last summer, Brenda suggested that they look for a home to purchase in Lanesboro since they enjoyed coming so often. Rooney was on board with that, and was very clear that even if it was only a part-time home, he wanted them to connect with the community. They bought a small house to fix up, but as Brenda still works as an epidemiologist at Gundersen Health System in La Crosse, they continue to maintain their home there for the time being, with plans to eventually move to Lanesboro.

Once they bought the house in Lanesboro, Rooney signed up for the community emails. He had hoped to do some traveling and then find a job somewhere since he was newly retired, but with the pandemic, he found himself stuck at home and isolated instead, which delayed his job search. As it turned out though, that delay was exactly what he needed. During that time, he noticed a posting in the community emails for a new museum director. He didn’t think much of it, but Brenda encouraged him to ask about the job and find out some more information. He did and the next thing he knew, he was interviewing for and accepting the role. “In my mind, I never applied for this job,” he laughed. “It was not an act of intention.” Of all the jobs he could imagine himself doing after retiring from teaching, being the director of a museum was not even on his radar. “That’s Lanesboro!” Webb exclaimed. “It kind of reaches out and wraps you up.” If it hadn’t been for the delay in looking for a job, Rooney probably would have found a different job months earlier and not been available when the museum job posted. “It was very much serendipity,” he said.

Rooney doesn’t have any big plans for changes at the museum at this time. “I’m smart enough to not commit to a new situation and say, ‘this is changing, this is changing.’” he said. “What I’ve learned is that there’s a really gifted staff here and a lot of really talented volunteers. Right now, the best thing I can do is support them in what they do and then as time goes by, I’ll figure out where the gaps are where my talents come in.” As for now, he’s learning new things every day and looking forward to growing his knowledge of Lanesboro’s history.

Webb is confident in Rooney’s abilities and has only one piece of advice for him as he begins his new venture. “Be ready to be surprised and be ready to be embraced by the community.”