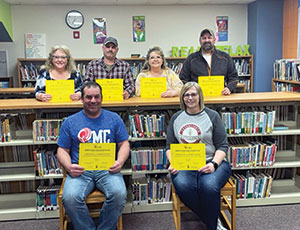 The board discussed Mabel-Canton’s efforts to find a replacement for Gary Kuphal as superintendent for the 2022-2023 year, following the submission of his letter of resignation.  Kuphal explained that, “If the board is still interested, I would be interested in coming back two days a week.”  He added that if the board approves this, he would sit down with the board’s three negotiators to settle on a payment agreement.  The board voted to approve this offer.

As part of an annual tradition, four senior students addressed the board.  Senior Class President Camryn Cox stated, “On behalf of the senior class, we are requesting for the last day of our school year to be on May 25.  If this is allowed, we will not have a senior skip day or do a senior prank.”  Also representing the class were Vice President Emily Carolan, Treasurer Molly Lee, and Secretary Emma Middendorf.  The board approved the request.

Lonnie Morken asked the board to consider approving him to drive student-athletes to and from track practice once per week, regularly on Wednesdays.  He explained that a group of parents of the track participants have taken on the responsibility of getting the athletes to and from practice on the other days, but Morken wanted to simply give these parents “one day off” per week from this task.  At Superintendent Kuphal’s suggestion, Morken explained the history of how transportation to and from practices has evolved (for some sports in which Mabel-Canton has seen low participation numbers), which then involves the student-athletes going to join a team in another town.  Morken stressed that his request is only for practices, as transportation to track meets has already been arranged.  The board approved Morken’s request.

In discussing the agenda item entitled “Unrequested Leave of Absence or Voluntary Reduction,” Kuphal explained his recommendation that the board consider approving the potential elimination of a 1.0 FTE staff position.  He explained that this is a necessary step if such reductions are needed.  He stated, “This year, while we’re still working through things and don’t know exactly what’s going to happen, we need to take this next step tonight.”  He went on to say, “We are recommending administratively that we reduce a 1.0 FTE elementary classroom teacher.”  Kuphal also informed the board that, because of seniority rankings, if this reduction happens, the employee impacted will be Jennifer Burroughs.  He said she is aware of this possibility.

Principal Wiedemann explained the reason for this is because of smaller enrollment numbers in the third and fourth grades.  Kuphal explained that the reduction, if needed, will be effective June 30, 2022.  The board voted unanimously to approve the resolution as suggested.  Kuphal again stated, “This is not a given, depending on what happens over the next month or two.”

Kuphal gave each voting board member a certificate of appreciation, in honor of School Board Appreciation Week.  The board’s next meeting will be April 19 at 6 p.m.  The public is welcome.