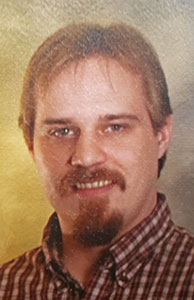 Karsten C. Kinstler, 42, of Houston, Minn., died on Wednesday, February 10, 2021, at the University of Wisconsin Hospital in Madison, Wis.

Karsten was born on September 26, 1978, in Winona, Minn., to Dennis and Bonnie (Anderson) Kinstler. He was the youngest of five children and was raised on the family farm at Perkins Valley in rural Houston, Minn. Karsten graduated from Houston High School where he was active in Theater and Speech. He also attended Winona State University. Karsten worked at TRW in Rushford, Minn., Houston Grocery Store, on the family farm, at his sister’s day care, and was a primary care giver for his nephew Joseph for many years.

Karsten is survived by his parents Dennis and Bonnie of Houston, siblings Karmen Kinstler and Korey (Jennifer) Kinstler, both of Houston; and Kalvin Kinstler of La Crescent, Minn.

He was preceded in death by his brother Ken and his nephew Joseph.

There will be a funeral service for Karsten at 2 p.m. on Thursday, February 18, 2021, at Cross of Christ Lutheran Church in Houston, Minn., with the Reverend Linda McPeak officiating. Burial will be at the Stone Church Cemetery in Houston. Visitation will be one hour prior to the service on Thursday at the Church.

Please leave a memory of Karsten and sign his online guestbook at www.hofffuneral.com.