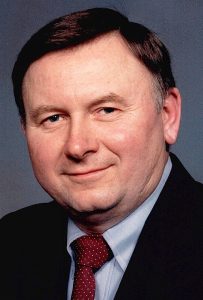 John Merlin Cramer, 85, of Chatfield, passed away on Saturday, June 11, 2022. Merlin was born on October 2, 1936, to William and Evelyn (Pogatchnik) Cramer in Randall, Minn. Here, William owned a gas station and auto repair shop, prior to obtaining his welding certification. William welded on United States Navy ships during WWII, which brought he, and Evelyn and their four sons to Oakland, Calif; Milwaukee, Wis., and finally Chatfield, Minn.

Merlin was eight years old when he arrived in Chatfield. His father purchased a building on North Main Street which became a welding shop in 1945, acquired an adjacent gas station in 1950, and built a two bay self-serve carwash in 1965. Merlin worked with his father for a number of years prior to acquiring all three businesses outright in 1970.

Merlin married his high school sweetheart, Donna Baier, in 1956. The couple raised four children: Daniel, Cindy, Michael and Brian. Merlin enjoyed taking fishing trips up north with his family, was a den leader for the Boy Scouts and served his country for eight years as military police in the Army Reserve. He was a talented designer and craftsman, not only in metal fabrication but also woodworking, having built bunk beds and rocking horses for his grandchildren. He designed his own home, breaking ground in 1989.

Merlin expanded the welding shop by adding a sizable addition. He worked together with his son Mike on many significant fabrication projects including building innumerable Cramer custom built trailers and designing and fabricating the first dipper line for Rochester Medical. He teamed with a Swiss engineer to design and build massive mechanical compost screeners, one of which went to Disney World in Florida.

These are but a few of Merlin’s achievements, but among the most rewarding jobs were the countless repair and fabrication projects for local farmers and workers. He engaged in community undertakings such as donating his time to weld the rebar within Chatfield’s first swimming pool.

Merlin sold the businesses outright to Mike in 1998. Upon retiring, Merlin and Donna traveled throughout Europe, to Hawaii and Alaska. The couple attended polka festivals throughout the Midwest and devoted time to the family farm. He and his wife were devout Catholics and members of St. Mary’s Catholic Church.

Funeral service will be held on Tuesday, June 21, 2022, at 11 a.m. at St. Mary’s Catholic Church of Chatfield. Visitation will be held at St. Mary’s directly prior to the funeral from 9:30-11 a.m. Online condolences are welcome at rileyfuneralhomes.