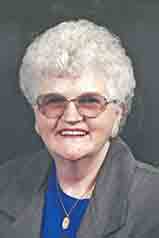 Joanne Delone Bjorge was born on March 23, 1936, in La Crosse, Wis., to Gynther and Helen (Braaten) Bjorge. She was raised in Rushford and graduated as salutatorian from Rushford High School in 1954. On February 5, 1955, she was united in marriage with Hollis Heiden at Rushford Lutheran Church in Rushford. While raising her five children, Joanne also ran in home daycare and did seamstress work. She was a member of St. Mark Lutheran Church in Rushford where she was active in ladies aid, Bible study and Sunday school. Joanne was very passionate about her faith and her family, and she absolutely loved people.

She is survived by her five children: Rev. Dennis (Sheila) Heiden of Mankato, Minn., Susan (Tom) Matter of Farmington, Minn., Donald (Mary) Heiden of New Augusta, Miss., Sarah (Mike) Siebenaler and Dean Heiden, both of Rushford; 15 grandchildren, 27 great-grandchildren, three great-great grandchildren with one more on the way; two sisters: Rosie and Pam, and Kim and Beth, who she considered her daughters.

Joanne was preceded in death by her parents, husband, brother, Virgil and grandson, Scott.

A funeral service was held for Joanne at 2 p.m. on Sunday, January 2, 2022, at St. Mark Lutheran Church in Rushford. Burial took place in the Rushford Lutheran Cemetery. Visitation was 3-5 p.m. on Saturday, January 1, 2022, at Hoff Funeral Home in Rushford and one hour prior to the service on Sunday at the church.

Please leave a memory of Joanne and sign her online guestbook at www.hofffuneral.com.