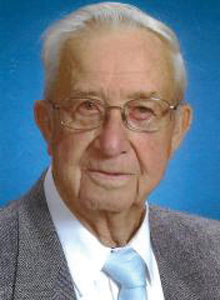 Funeral services will be held at 2 p.m. Friday, July 19, 2019, at the Preston United Methodist Church, with Pastor David Stoeger officiating.  Burial will be in Carimona Cemetery in rural Preston.

Jim was born on March 21, 1931, in Carimona Township near Preston, Minn., the son of Edwin “Alden” and Esther (Utley) Pickett. He was raised on a farm, and graduated from Preston High School in 1949.  After graduation he joined the Army, served two years based at Fort Sill, Okla., during the Korean conflict, and was honorably discharged with the rank of corporal. After completing his Army service, Jim returned to Preston and farmed with his parents, purchasing the family dairy farm when his parents retired.  On May 11, 1968, he married Elaine (Johnson) Lindorff.  He willingly accepted her seven children, and lovingly treated them as his own.  Jim and Elaine lived on their farm two miles west of Preston, and remained there after their retirement.  They loved to travel together, and enjoyed browsing antique and flea markets.  Jim and Elaine shared 43 years of marriage before she passed away on May 20, 2011.  Jim moved from his farm to Park Lane Estates in Preston in December of 2017.

Jim was a lifelong member of Preston United Methodist Church, where he co-chaired their annual codfish dinner for a number of years.  He was an active member of the Preston American Legion.  He served as an officer and was a proud member of the color guard.  Jim also served on the Carimona Cemetery board and on the board of Fountain Township for 37 years.  He volunteered many hours at the Fillmore County Historical Society’s museum, and served as president on their board of directors.  Jim was known for the tasty lefse he made for family on holidays, and at one time joined with a friend to make and sell enough lefse to pay for vacations to Hawaii and Aruba with their wives.  He enjoyed outdoor activities and tasks around his farm, along with driving the countryside in his pickup truck to check on how his neighbors’ and friends’ crops were progressing.  Jim also enjoyed socializing with friends, especially the morning coffee group; reading, bird watching, and viewing movies, westerns, and many kinds of sporting events.

He was preceded in death by his parents, his wife Elaine, one stepdaughter, JeLaine Kraetsch; one granddaughter, and one great-granddaughter.

Friends may call from 5-7 p.m. Thursday, July 18, 2019, at Preston United Methodist Church, and also one hour prior to services at the church.  Hindt-Hudek Funeral Home Preston is assisting the family.