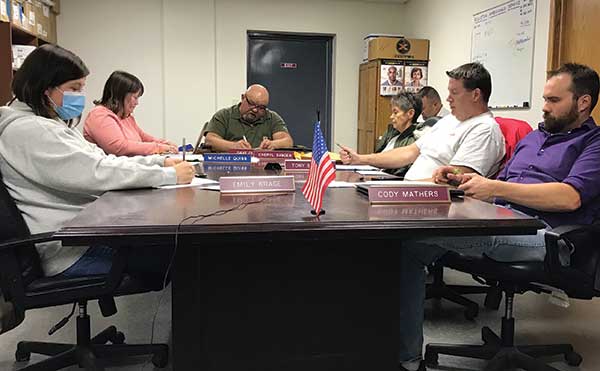 The Houston City Council decided to pay the training expenses of individuals willing to become trained EMTs at their regular council meeting December 13, 2021. People who train to become EMTs are asked to invest almost 200 hours of their own time for the training. They meet in person once a week during the course and complete the remainder online at their convenience. The training expense for each EMT is $1,560 with bridge training for health care workers costing $425. Three people are currently interested in their program; another two are possibilities. The city hopes to encourage and train a total of 10 EMTs; the offer of paid training will be for the year 2022.

City Administrator Michelle Quinn presented the city’s current financial situation at the Truth in Taxation meeting. Quinn reported that the LGA funding was increased by $5,600 to $380,500 for next year. The city had originally budgeted a 3% levy increase; Quinn informed the public, the levy would be able to be decreased to 2%. With no questions from the public, the Truth in Taxation meeting was adjourned and the council adopted the final budget and 2% levy for a total levy of $548,800.

Mohs shared that lift station work would be done after the holidays. He informed the council that the Trunk Highway 16 project is currently scheduled for 2030, but may be moved up to 2028. He noted that the state knows about the concerns about the utilities and is trying to move it up on the project list.

The council agreed to an ambulance collections agreement with AAA Collection Agency. This will provide another option for collection of unpaid ambulance bills; there will be no charge unless the city of Houston opts to turn a bill over to the agency.

Amanda Langheinrich’s resignation as a custodian was accepted by the council. The custodian job is currently open. The job pays $14.44 per hour for about 15 hours per week; the custodian will provide routine care for the city park, community center, city offices, and library.

Police Chief Brett Hurley reported that he had several applicants for the full-time police position. He also shared that Houston County Law Enforcement would once again have Santa deliver presents to some area families.

City Administrator Quinn told the council that the Explore Minnesota tourism group was now requiring proof of vaccination or a plan to test for COVID for staff members of cities signing the group’s agreement. This group was offering free tourism materials to be offered at the Nature Center as well as inclusion of the city and Nature Center in their guide in return for visitation data collected at the center. The consensus of the council was that the city will not return that paperwork at this time, choosing not to make such a requirement of employees.

•Set the new community center as the polling place for the city;

•Adopted the meeting schedules for 2022;

•Accepted additional money ($1,671.97) from the federal ARPA Covid funds to possibly be used for sleeving water pipes on Cedar Street;

•Adopted a loan resolution security agreement for the pumper truck loan and agreed to continue to allow Michelle Quinn and Mayor David Olson to sign the necessary paperwork.

The next Houston City Council meeting will be held in the council meeting room at city hall at 105 West Maple Street at 6 p.m. January 10, 2022. The junior varsity wrestlers use the community center for practice until 5:30 in the evenings. The council’s plan is to meet at city hall from now unless it appears that the council meeting will bring in a lot of citizens. In that case, the meeting would be moved to the community center. The public is welcome to attend; the citizen comment portion of the meeting is at the end of the meeting.