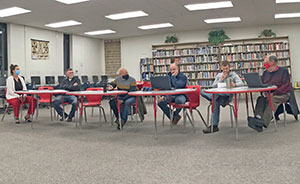 The required Truth in Taxation meeting for Houston Schools took place December 2, the same night as the regular board meeting with several tax payers present. Gwen Rostad, Houston’s director of finance, presented an informational PowerPoint on Truth in Taxation and the current status of the district. Rostad pointed out that the assessor determines the market value of properties based on recent sales; the county auditor then calculates the tax capacity of the property.

Proposed tax levels were sent out in November for the taxes to be paid in May. The statement lists what the owner owes for taxes for each governmental body.

Rostad showed that state aid has not kept up with inflation; as a result, many school districts have needed to collect more. Rural school districts with fewer commercial properties have a harder time adjusting. The Houston school district has done its best to keep the tax rate flat (steady) without a big tax increase by careful scheduling of larger necessary investments and expenses.

At the next meeting in December, the board will take action to further reduce the levy rate. The levy is 4.3% of total revenues for the district.

Rostad emphasized that the long-term facility maintenance project will have no effect on the property tax. Eighty-eight percent of that project will be covered by the state, with the local school paying 12%.

Council chair Tom Stilin noted that there has not been an increase in the tax rate for the district for over 10 years. He explained that total taxes may have indeed gone up because of increased value of the property.

Ag2School Tax Credit gives farmers and timber owners a tax reduction. This credit comes from the state income, sales, and other taxes.

Board member and local realtor Arlin Peterson encouraged taxpayers to go to the county if they wish to dispute their assessed values. He clarified that any action taken would be for the next year’s taxes since this coming year’s taxes were already set. He added that property classifications have had a huge change this year and thus affected taxes.

The board set their first meeting in January (January 6) for their organizational meeting. Superintendent Mary Morem gave the board a heads up that she might suggest changing to one meeting per month with the possibility of adding additional work sessions as needed.

Morem shared that she wanted to send out a survey to all staff and form a team to help set the academic calendar. The board agreed that parents, students and community members should be included as well. Stilin noted that it would be good to have a common schedule with surrounding schools in order to give students a chance to take classes such as Ag at neighboring schools.

The board discussed the current concession stand pizza agreement with Cenex. In recent years, the school had tried to save money by baking and selling their own frozen pizzas. This year Morem was approached by Cenex with a proposal for pizzas with delivery. She had agreed to the proposal without realizing that Sub-Zero had provided the concession pizzas in the past. Since they are midway through the year, the board suggested that the school could alternate years between Cenex and Sub-Zero providing both businesses could deliver the pizzas.

Activities and Communications Director Mikayla Simmons reported that the live streaming for basketball games is going well. She told the board that the announcer could easily be heard. A second camera will be added to display the scoreboard for upcoming games.

A required COVID-19 vaccination policy was passed by the board. The MNVA staff had to be included in calculations which had brought the employees to well over the 100 employee minimum. The board continues to hope the mandate will not be enforced, but recognized that if it were, they would have no choice in the matter.

Morem shared that the first pre-construction meeting for the long-term facility project will be January 5 with additional meetings to come as the project moves forward.

The next regular Houston School Board will be January 6, at 6 p.m.; the public is welcome to attend in person in the high school media center. The meeting will also be streamed, with a link on the school website.