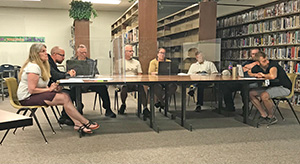 Sara Guyette and Ben Tillman of Sitelogiq presented a pre-design summary of a 250-seat auditorium addition to the Houston School Board at their June 17 meeting. Krin Abraham, as one of her last acts as Houston Schools superintendent, had arranged for the presentation of the plan. Although the board does not have funding at this time for an auditorium, they wanted to consider a plan in the event that grants become available.

Guyette pointed out the concerns that arose in the pre-design. There is a high water table in the location, it will be structurally difficult with the existing pylons and foundations, and the snow load on the building will need to be considered.

In March 2020, Minnesota adopted the 2018 IBC which requires all additions to schools to be able to withstand 250 mph winds and up to 100 mph projectile impacts; they also need to be mechanically self sufficient for two hours and be sized to shelter the occupant load of the addition as well as provide restrooms for the occupants. This new requirement creates a tornado shelter and would increase the projected expense by $2.5 million.

Since the auditorium would be used during non-school hours, there would not need to be additional parking provided.

Two layouts were presented: a north-south configuration and an east-west configuration. Both layouts included a lobby area, ticket booth, stage, orchestra pit (or area), storage, backstage areas such as green rooms and dressing areas.The building would have a 15,000-square-foot footprint.

The budget all-in at 2022-2023 construction costs would be in the $9 to 10.5 million range. The fact that the tornado shelter is now required, that the auditorium needs a larger span than classrooms for example, and that there is a complicated structural foundation in existence all increased the cost of the building.

Board member Josh Norlien declared the tornado shelter would be a selling point to the community since it would be safer for the students. Arlin Peterson chimed in that perhaps the city would want to use it as a city tornado shelter and might be interested in helping with funding.

Board chairman Tom Stilin thanked the presenters and observed that it was good to have a concept of an auditorium to present the state if funding was to become available.

The board quickly handled the business at hand. They heard from Abraham that the plan was in place for safe return to in-person learning; this plan will need to be updated every six months.

Three outdoor security cameras ($12,459.50) were approved. The cameras will be in a teardrop with a four-headed camera able to cover much more area.

The Q-Comp annual report was presented; at this time, however, the MCA scores were not available to provide feedback for the teachers on whether the students met the MCA targets.

The literacy plan showed lower elementary scores; this was expected since distance learning proved to be difficult for the younger learners.

Field trips were down for the past year; next year’s seventh and eighth graders did not get a capitol field trip. Abraham suggested that those classes may be requesting some sort of a class trip in the future.

The proposed budget for 2022 was approved with the understanding that there may be adjustments to the budget once MNVA enrollment is firmed up. A finance meeting will be held once new superintendent Mary Morem is on board.

The board approved a lease agreement for athletic fields with Hoedown; they also approved the addition of the elementary fields for city summer rec use. MSHL membership was approved as well.

The teachers voted to change the evaluation process for Q-Comp from the Charlotte Danielson framework to the Marzano Focused Model. Board approval and a MOU is necessary for the change to go into effect.

Krin Abraham read her final words as superintendent to the board. She said 23 years ago she had done something she had said she would never do – come back to Houston to work. She went on to declare, “It was the best decision in my life.” She continued, saying that she had never wanted the title of superintendent, but that, when a few years later she felt that she and her colleagues had been “thrown under the bus,” she suggested, “Since we are all under here, let’s pick up the bus and take it where we want to go!” She had then applied for the superintendent position seven years ago.

Abraham felt the district had “moved the bus and set it on the path that we had envisioned those years ago.” She listed a multitude of changes in the facilities of the school, educational technologies, and curriculum including social emotional classes, noting that all the changes were for the students and the goal of providing the best education for the students. With pride, she mentioned that the elementary school had been named a 2020 National Blue Ribbon School and that the high school once again was named one of the top high schools in Minnesota in the US News and World Report.

Abraham concluded her thoughts, encouraging the board to support their new superintendent, Mary Morem, so they could “continue on the path of continuous improvement.” Her final words to the board, “Thank you for being part of this team and serving as my work family. I will miss working with you. Thank you.”

The next Houston School Board meeting will be July 15, in the high school media center; the public is welcome to attend.