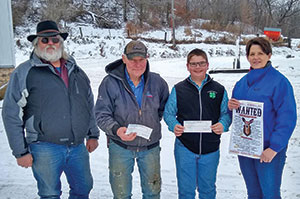 The Houston County Farm Bureau (HCFB) is happy to announce this year’s Biggest Doe Contest winners. Garrett Waldenberger, age 13 and son of Ken and Heidi Waldenberger, of Spring Grove brought in a doe weighing 145.4 pounds. Garrett harvested the winning doe during the regular hunting season on Steve Klug’s farm in Spring Grove Township. Waldenberger and Klug were both presented a $500 check from the Houston County Farm Bureau on January 4 at the Klug farm.

“I have been hunting for four years, but this was my first successful year,” said Garrett. “I really enjoy hunting and trapping and am thankful that my Dad takes me out to help me learn these skills.”

In total, Garrett harvested four does between youth and regular season this year. Garrett plans on using his winnings to purchase a gun to take part in the high school trap league in the spring.

Klug stated he himself was not a very good hunter and was happy to open his land for hunters. It helps his farm immensely to lower the deer population and prevent damage to his livestock feed and his crop.

The idea for the HCFB Biggest Doe Contest was to encourage hunters to harvest more does and to encourage landowners to allow hunting on their property. The winners of the year’s competition are a perfect example of the hunter/landowner cooperation. HCFB appreciates the support of Bluff Country Meats in Eitzen and Stinson’s Country Style Meats in Houston for their willingness to weigh the does.

Every year for the past 10 years the HCFB Board of Directors has met with various staff of the Minnesota DNR to share challenges of trying to successfully farm while sustaining considerable crop damage from wildlife, especially from whitetail deer. Last spring, Minnesota DNR Commissioner Strommen met with about a dozen Houston County farmers to hear their concerns and discuss ways to reduce the number of deer in Houston County. This included discussion of the elimination of the antler point restriction and earn-a-buck.

Because of the detection of Chronic Wasting Disease (CWD) in every direction surrounding Houston County, the stakes are getting higher. The two most effective ways to manage a CWD outbreak is to reduce herd size and harvest bucks.

“The battle against CWD will be won through the cooperation of hunters, landowners, private deer farm owners and appropriate regulation by the Minnesota DNR and the state legislators,” said Cynthie Christensen, HCFB president. “We are hopeful that the reward for the Biggest Doe harvested created a little hunting excitement and gets hunters thinking about harvesting does. The Houston County Farm Bureau Board of Directors would like to thank everyone that participated in this year’s competition and is considering running the contest again next fall.”