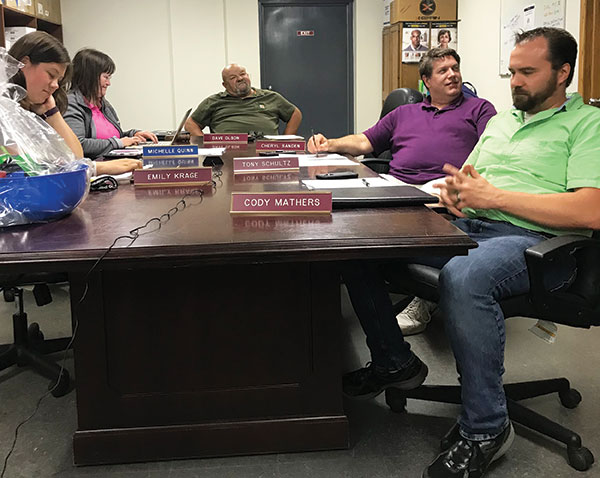 The Houston City Council approved ordinance 236 regarding the non-profit use of the community center and other city properties after a lengthy discussion at their meeting on June 13. The council wrestled with finding a balance between supporting non-profits and receiving rental fees for the facilities. Michelle Quinn pointed out that the taxpayers were already being levied to pay for the building and upkeep. The rentals could help with expenses incurred, however.

Non-profits registered with the state will be able to use the center without a fee during non-peak days (Monday through Thursday) provided they are not charging a fee or doing any fundraising and are willing to reschedule if a paying rental request comes in.

The scouts will continue to meet at the community center on Sunday evenings for no charge, providing they are willing to move if a paid rental requests the center. The Lions donated bandshell can be used by the Lions twice a year during peak days with no charge.

All other non-profits will be charged the regular rental rates for peak day use; the community center rate will be $300/day. Karla Bloem of the Owl Center pointed out that without a reduced rate, many non-profits would think twice about using the center and the city could potentially lose money as a result.

Summer Rec has begun in full force with the hire of eight student staff members. Much of supervisory workload has fallen on city office staff, Michelle Quinn and Suzanne Peterson, and on city council member Emily Krage who has taken on the ball portion of summer rec. Quinn and Krage noted that there “wasn’t an abundance of records for summer rec.” They have gone through the equipment, ordered needed new supplies, and are organizing information on a spreadsheet for future reference.

Krage thanked the many community members that helped with the field preps. The duo plan to come up with some “rules of thumb” for families regarding cancellations for heat and bad weather in order to cut down on the need for individual emails and phone calls.

Marlene Schultz, representing the Hometown Pride group, asked for an update on the city’s Christmas street light decorations. Concerned about the timing, Schultz asked if the “yet to be named” group had come forward yet to purchase new decorations.

Since there has been no news at this time, Hometown Pride will refurbish some of the old decorations with ribbon to be supplied by the Chamber of Commerce. Any new donations will be planned for use the following year.

Karla Bloem shared that she has been writing to both the DNR and the Federal Highway Administration regarding the repercussions if Houston does not continue with the proposed OHV trail.

• Accepted the donation of a composite bench in memory of Fred and Marilyn Huhn to be placed at the Nature Center in the area used for the summer music events;

• Received a gift basket from Matt Mohs, an update on the WWTP, and no payment request! — the change over to the new plant is planned for July at which time demolition of the old plant will begin;

• Hired Emily Weichert as the Nature Center assistant for up to 18 hours a week;

• Learned there had been no inquiries or bids on the old community center building; they will decide on further action at their next meeting;

• Approved the Cross of Christ excluded bingo to take place on Hoedown weekend;

• Learned that they will need two community members to represent Houston on the Houston to La Crescent bike trail planning; interested citizens are urged to contact city hall;

• Approved a request from Larry Graf to move the Hoedown tractor show a block closer to the city park; this is being done to centralize the events nearer the vendors at the park.

The next meeting of the Houston City Council will be July 11 at 6 p.m. in the city hall council chambers; the public is welcome to attend.