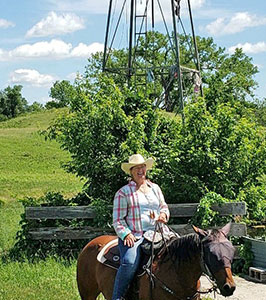 Kari Johnson fell in love with horses when she was about five years old, and still loves them. According to her, it was her dad’s fault; Dad had a buddy whose daughter had a horse, and he insisted that Kari needed one too! When her dad brought home her first pony, Kari fell head over heels for it. Kari was the youngest of five kids; none of the other kids was into horses at all.

When Kari was around 10 or 11, she bought her own mare and started showing her horse locally. She didn’t get a horse trailer until she was 16, so her parents would load up her horse in an old cattle truck and take Kari and her horse to shows. Kari chuckled that her parents went along with it because it kept her busy and out of trouble.

She and her friends would often go riding together with just halters and lead ropes on their horses. “We were fearless then,” Kari reminisced.

Kari and husband Tim had two boys, Tyler and Clay. As the boys got older, they began to show horses in 4-H. Summers for 10 to 12 years were spent going to SEMSCA (Southeast Minnesota Saddle Club Association) shows. Almost every weekend of the summer was spent at the shows, with a total of 16 shows and a culminating Champ show at the Minnesota State Fair grounds. The Champ show was the biggest horse show in the U.S.

As the boys got older; they joined FFA at school and transitioned from showing horses to showing cattle. The summer horse shows became a memory; Kari never really got back into showing horses.

Kari now has just two horses that belong to her; the fewest she’s had since her college years. Recently she had to put down a retired horse. Since New Year’s Day, she also boards her son’s girlfriend’s horse. The horse and owner have been doing training sessions this winter.

Lady suffered an injury three years ago and tore a ligament. It took six months of rest and walking for about a year for Lady’s injuries to heal. Up until the injury, Lady had been Kari’s go-to horse. Now Remi goes on the trail rides and Lady is the back-up, the spare horse for a friend to ride.

Kari takes her horses to John Rein of the Harmony/Cresco area for veterinary care and spring vaccinations and blood tests. She also books a horse chiropractor through a friend, Teresa Coyle in Canton. Coyle does horse training and riding lessons for kids; she books a chiropractor to come down from the Twin Cities to care for horses in the area several times a year. Kari usually has her horses seen in the spring and later in the summer.

No one else rides in Kari’s family; Kari goes on rides with the girls, a group of women who also love horses. With the guys holding down the fort, the girls enjoy their girl time on the trail rides.

Kari lives on a 280-acre farm with a lot of woodland; her friends who live nearby also have good trails on their property. They also plan longer distance trips locally and usually one big trip a year.

This coming summer, the women plan to travel to Custer in South Dakota. They have been to Fort Robinson State Park in Nebraska several times. Fort Robinson is one of Kari’s favorites; it’s an old Army fort at which cavalry horses were trained. The women’s horses are put up in the same stalls used by the cavalry horses.

There are several trails just two to four hours away that Kari and her friends like. They enjoy riding at the privately owned Big Valley Ranch in Avoca, Wis., as well as at WildCat State Park near Ontario, Wis., and Yellow River State Park near Waukon, Iowa.

Their horse trailers have living quarters in the trailers; often the stalling fees for the horses are included in the campground fees. At state parks, they pay a minimal fee to use the parks.

Last summer, the women went on their usual trail rides; as Kari noted, “You are always social distancing on a horse!” It was a great way to get away from the pandemic and relax. They do the majority of their trail rides in the fall as the weather cools off.

Kari declared she’d like to get out west to ride more — Montana, Wyoming, and Colorado; the Big Horn Mountains appeal to her. She has more of a desire to go out west, but enthuses there are some great trails out east as well.

When asked what she enjoys most about her horses, she shared that she enjoys cleaning the stalls for her horses in the winter. Although it doesn’t sound enjoyable, Kari says, “Cleaning stalls is my peaceful time.” She goes on, “Every day I’m thankful for where I live; I can go home every day, take my mask off, and relax.”

Kari shared that the majority of horse owners are females. She said when her boys showed horses for 4-H, 90% of the people showing were female.

Training a horse takes many, many hours of work. “The end result, the progress, every little step, gives you a feeling of accomplishment,” Kari enthused. “On trail rides the crossing of a creek or river, and climbing a steep hill — each gives a sense of accomplishment!”

“Once you love the horses, it tends to stick with you the rest of your life!” Kari declared.