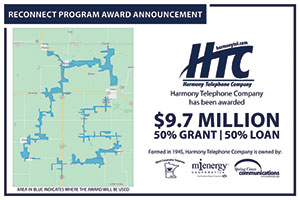 A public hearing to discuss the application of a grant from the Small Cities Coronavirus Community Development Block Grant Program was held at the beginning of the May 11 Harmony City Council meeting. Harmony Telephone would like to apply for it in conjunction with the City of Harmony so that the every home in town would have access to broadband internet. The grant would pay for the buried fiber and Harmony Telephone would cover the cost of the electronics necessary for the project. No questions or comments were received from the public and the hearing was closed. The council approved a participation plan and Resolution 21-08 regarding the application for the grant.

The consent agenda was approved and included liquor license renewals for four Harmony businesses, a gambling permit for Harmony Golf Course, and a prosecutor agreement between the city and Fillmore County. It also included approval to hire J&M Displays for the 2021 Fourth of July celebration and Mosquito Control of Iowa to spray for mosquitoes in Harmony.

City Engineer Brett Grabau distributed copies of the Dairyland Utility improvement plans to the council members. The original estimated cost for the city was $630,000, but that has dropped to around $400,000. The council approved the solicitation of bids for the project as well as the plan specifications and timeline.

Swanberg asked if the council would be interested in taking out a loan with a rural water loan program to pay off a bond the city has with a higher interest rate. The bond still has seven years left and paying it off with the lower interest loan would save the city about $18,000. The board approved the loan.

A quote was presented to the council in the amount of $9,618 for a camera system for inspecting pipes. As of now, the city has to pay a service to look at pipes or rent a camera from the City of Preston. It would be beneficial for Harmony to have its own. The council approved the purchase.

A quote from Morem Electric was received for new light poles. Swanberg noted that some of the light poles on Main Street are past their life expectancy and are no longer made. The cost for new poles would be about $5,000 per pole with LED lights and the old ones could be repurposed elsewhere. A motion was approved allowing Swanberg to look into purchasing up to 25 new light poles with the money coming from the Electrical Fund.

The EDA report was reviewed. It was noted that the chargers for electric vehicles have been ordered.

A bill in the amount of $38,000 from Generation X Construction was received for the splash pad. There is still some work that needs to be done that will total about $8,000. A motion was made and approved to solicit bids for the rest of the work and to allow the Minnesota Department of Health to review the engineer drawings.  A second motion to pay the bill from Generation X with $10,000 coming from the Donald Wilken fund, $6,000 from the Park Board, and the rest from donations was approved.

The next Harmony council meeting will be held on June 8 at 7 p.m.