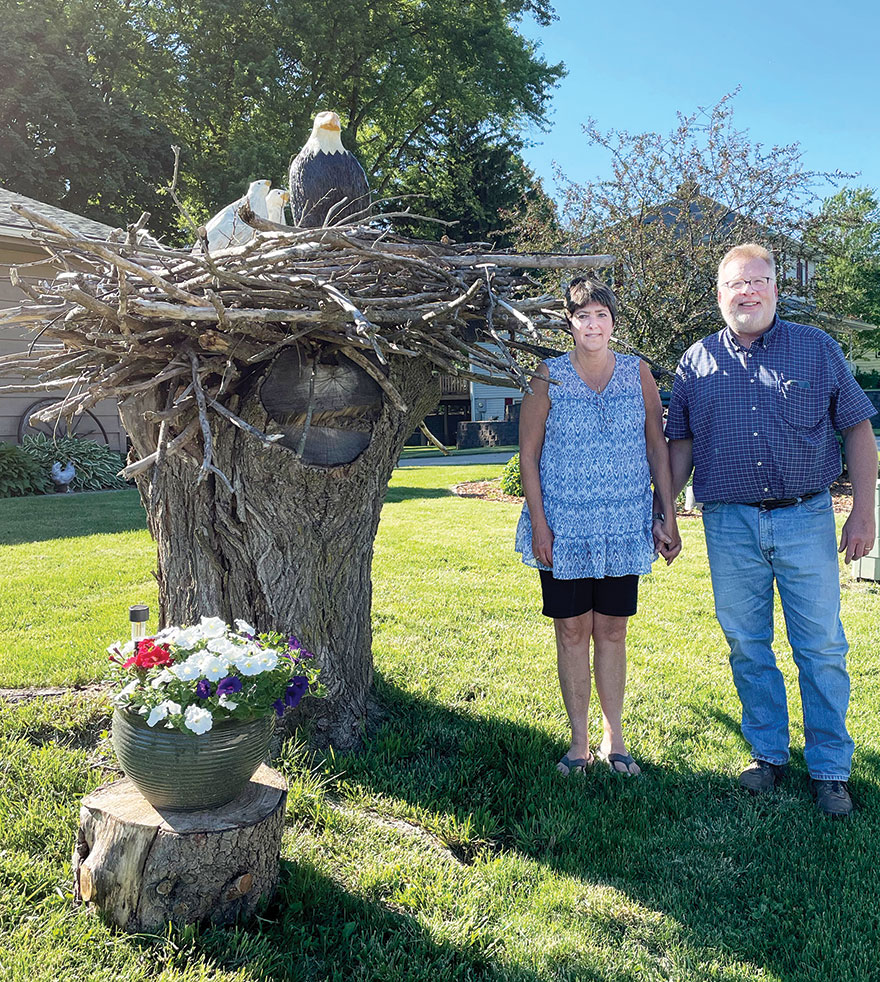 Drivers traveling First Avenue Southwest in Harmony might be taking a second look as they pass the home of Ron and LeAnn Gregg. The couple has created a unique piece of art in their front yard, a project that emerged after their beloved maple tree had to be cut down once it began losing its branches. It was a sentimental tree, as their sons has climbed through the branches as they grew up.

When a unique looking stump remained, the couple began to formulate ideas for what they could do with the stump to add to their landscape.

LeAnn shared that her first idea was to hire a chainsaw artist to carve an eagle sculpture from the trunk. However, after contacting a chainsaw club in Rochester, she found little interest from the artists. Some carvers were booked for two years while others had no interest in traveling to Harmony for a project.

Ron also interjected that they had been told their stump was from a soft maple, which would likely rot in five years. Any investment made to create a work of art from the stump would be short lived.

The two agreed they still wanted to do something with the stump and they decided to build an eagle’s nest that could sit atop the stump.

When driving near Chatfield one day, Ron saw a wooden eagle carving and was intrigued. When he and LeAnn inquired, they discovered the eagle had been created by Bill DuBond, and purchased the sculpture to be added to their nest.

As their vision developed, Ron began collecting branches in a nearby woods that were the right size to create the nest. “We wanted it to be as authentic as possible,” Ron said, so they even considered if an eagle could actually carry a certain branch before adding it to their pile of supplies.

After about a week of gathering, Ron and his sons Matthew and Andrew began weaving the sticks into a nest around the eagle, which has been mounted on the stump. As the nest grew, the Greggs assessed how it compared to an actual nest in both size and construction, again keeping it as natural as possible. It’s about six feet across with the sides built up a bit more to cradle the eagles.

Because their home is on the west side of town, it can be quite windy, LeAnn pointed out, so the structure had to be sturdy enough to withstand high winds.

This past winter, two eaglets were added to the nest after LeAnn gifted the carvings to Ron for Christmas. Their size is a bit larger for the “white feather” stage of an eaglet, but LeAnn wanted to be sure they could be seen in the nest from the road.

The nest has become a home to more than just the wooden eagles that are perched on top. Sparrows have built a nest underneath the eaglets and have found it to be a convenient location near the bird feeders. “It’s fun to see the little birds utilizing the nest as their own,” Ron said.

“The birds love it,” LeAnn added. “There are always sparrows crawling all over it.”

The sculpture has also inspired others to pursue similar creations in their own yards.

“A lot of people will stop and take pictures, admire it and share compliments,” LeAnn said. “During COVID, a lot of walkers would stop and admire it, too.”

They both remember a “drive through” dinner at the Catholic church during the pandemic when they sent people past their yard to look at the nest. “We had many admirers and it is fun to share it with people,” Ron said.

Even though the eagles’ nest is not what they first imagined, LeAnn is glad it emerged in its current form. “If we ever move, this is something we can take with us,” she said. “A sculpture created from the stump, if it had survived, would have had to remain.”

The Greggs are big animal lovers, providing a home over the years for many orphan birds, critters and pets. They menagerie currently includes two dogs and a cat inside the house, but a myriad of other wild creatures outside.

Their eagles’ nest is just one more example of the Greggs providing a safe habitat for tiny living things while enhancing the landscape with a beautiful piece of art.