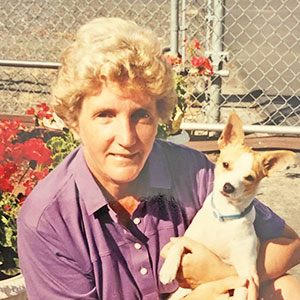 Hannelore “Hanni” Young, age 80, passed away June 30, 2021, at the Harmony Care Center. She was born December 23, 1940, in Wiesbaden, Germany, to Marie and Franz Forsterling.  Her father was killed in 1943, during WWII on the Russian front, so her mother raised her and her older siblings, Lieselotte and Herbert, by herself during a trying time in history.

Hanni finished school at age 13 and went to work in a shoe store to help support her family.  At age 18, she met and married an American GI, Kelly Polito and came to the US with him. The marriage ended in divorce quite quickly but she had a daughter Cynthia Ann. Hanni and Cindy returned to Germany where she worked as a receptionist for the American Military Hospital in Wiesbaden. She met and married Fred Young, and they had a daughter, Christina Marie (born in Germany), a son, Thomas Ervin (born in Nevada), and a daughter Linda Jean (born in Florida).  Fred, Hanni, and the four children left the USAF in 1971 and opened a TV store in Harmony. While in Harmony, Hanni learned to play golf and to bowl. She won many bowling trophies and once shot par on the Harmony golf course.  She also made a “hole in one’ and won the women’s open tournament.  Additionally, Hanni was an accomplished swimmer and would often jump off of the pontoon in the middle of the lake and swim and float for an hour.  Her hobbies included knitting, crocheting, needlepoint, and gardening.

She was preceded in death by her mother, father, and both siblings. She is survived by her husband, children and 12 grandchildren who will miss her dearly. She will be buried in the Preston Veterans Cemetery at the time of her husband’s death.  Rest in Peace, Hanni.