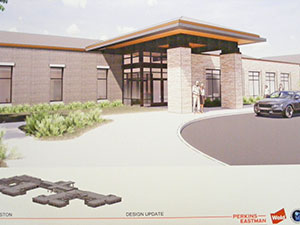 During a July 13 gathering at the Preston Servicemen’s Club, Minnesota Department of Veterans Affairs (MDVA) officials, the project planner and construction manager updated a group of veterans and local officials on project plans and the timeline for construction of the State Veterans Home.

The hour on August 19 for the ground breaking event is yet to be determined. The event will bring together future veterans home residents, local, state, and federal officials, supporters and advocates, and contractors. Information will be available on admissions and employment opportunities. There will be music and entertainment.

The reality of a future veterans home in Preston is the result of years of planning by local officials and volunteers. The Preston Committee was co-chaired by Ron Scheevel and Don Gildner. Lobbying for the veterans home began in 2013. In 2018 the Minnesota legislature passed a $825 public works construction bill which included $33 million for three new State Veterans Homes (Preston, Bemidji, and Montevideo). Rep. Greg Davids and Senator Jeremy Miller were instrumental in getting the state funding. Thirty-five percent of the cost comes from state and local funding. Over $1 million was raised from the county, individuals, and other groups. An application was submitted in 2019 for Federal VA funding; 65% is federal funding.

MDVA commissioner Larry Herke, a 31-year Army veteran, said we are now waiting for the actual final approval which is expected late this month or early in August from the Federal VA. In late June the Minnesota legislature passed and Governor Tim Walz signed a bill that ensures operational dollars will be available to open the home and care for residents.

Sara Malin, World Architects and Engineers, is in charge of the project. Her expertise is in senior living planning. She reviewed the design plans; plans are limited to some extent by available funding. The home will have three households of 18 residents each. There is a shared courtyard for each household. There is a public gathering space in the center. An area will be created for families to come visit and for residents to socialize or play cards. Every one of the 54 residents will have a private room and private bathroom.

MDVA deputy commissioner Douglas Hughes explained the intention is to make it feel like home as much as possible. Every effort in planning is made to make it feel less institutional. The household concept will make it feel smaller, more like a home.

The facility will encompass nearly 60,000 square feet. There will be space for a library, lounge, family dining, a reception area, quiet room, and more. There is a gas fireplace in the reception area and a large group room with many large windows. Residents can have a private zone and a community area. Attempts are being made to bring the outside in with windows that look out into the court yard which is fenced in. There will be a three season porch. The exterior will be brick and stone, making it a durable structure. A canopy will cover the entrance. There will be 79 parking stalls.

A veteran asked if a spouse could live in a resident’s room. Malin said it is not designed for that.

Commissioner Herke said there will be at least one household dedicated for memory care residents.

The total budget for the project is $35,443,542. The construction budget is $28,648,148. The actual site area is 9.33 acres. Davids asked about the difference between the construction expenditure and the total, pointing to some of the things that have been cut back. Herke explained there is enough for construction. Because of the escalation in costs due to COVID, plus soft costs, the project is expected to be right on budget. A little more may be needed for furniture and equipment.

Davids has introduced a bill in an effort to get another $4.2 million from the state to provide for items that were cut back due to funding constraints, including the original planned entrance road. Herke said all those extras that were taken out for value engineering could be done as part of project, as a change order, if the funds become available. Or, they could be done a few years after the project is complete. Davids thanked Herke and his staff, State Senator Jeremy Miller, U.S. Senators Amy Klobuchar and Tina Smith, and congressman Jim Hagedorn for their efforts. His thanks extended to the city council, veterans groups, Fillmore County commissioners, and neighboring county commissioners. Herke added it really has been a team effort all the way. To get all three veterans homes for the state of Minnesota is extraordinary.

Construction manager Derrick O’Connor, who also served in the military for eight years, reviewed the project schedule. Earthwork is expected to begin in September, footings should be complete in February 2022, structure is to be erected by April 2022, substantial completion is expected by March 2023, and  turnover to the owner/state is expected in May 2023.

MDVA Deputy Commissioner Douglas Hughes, who served 21 years in the military, discussed the process to apply for admission to the veterans home.

Minnesota Administrative Rule 9050 establishes guidelines for eligibility. A Minnesota eligible veteran, spouse of an eligible veteran, or a gold star parent must meet the clinical need for skilled nursing or domiciliary care. The veterans home is for skilled nursing and is licensed as a nursing home through the Minnesota Department of Health. Applications will be accepted at a date yet to be determined.

A question was asked about the cost. Hughes said some will pay nothing. He suggested consulting an elder care attorney or family law attorney for advise on assistance to a veterans home.

The veterans home will provide employment opportunities for 100 staff (95 FTE). Some staff will be full time, others part time. Herke expects staffing to be a huge challenge. They will be state employees. The most difficult jobs to fill will include certified nursing assistants and food service workers. An administrator, nurses, and other professionals including social workers, recreation therapists, and housekeeping/maintenance people will be sought. They will be looking for employees about nine months before opening. Herke noted they won’t open for 54 residents if they don’t have adequate staff. They will need help to get adequate staff.