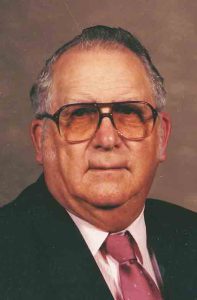 Gordon Lester Gudmundson, 99, died peacefully on Saturday, November 19, 2022, in Youngtown, Ariz. Gordon Gudmundson was born June 17, 1923. He married Selvina Erickson in 1952, and had one child, Dave. They were later divorced. In 1981 he married Lucille Siefert and they enjoyed their retirement in Sun City, Ariz. Lucille passed away in 2019 and Gordy continued to live in Arizona.

He served in the Army for a short period of time until coming home to work on the family farm.  After service and the farm in Highland he was a can milk hauler for the Preston Creamery, where he met his first wife Sally. After that he started Gudmundson Livestock in Chatfield until 1966. Gordy was a cattle buyer for Zumbrota Sales Barn, Lanesboro Sales Barn and Lewiston Sales Barn. He held many positions in the Fountain community such as on the Fountain Fire Department, Fountain Lutheran Church Council, and Fountain City Council. He fully retired in 2012 and Gordy and Lucille lived their final years in Arizona. He enjoyed cooking, playing cards, dancing, and going to casinos.

Gordy is survived by his son Dave (Kathy) of Fountain, Minn.;  and two granddaughters, Lisa (Bryan) Ostby of Fountain, Minn., and Sara (Brian) Schroeder of Preston, Minn.;  five great-grandchildren: Terron, Rylan and Taylor Ostby and Hayden and Elydie Schroeder; one sister-ln-law, Evelyn Gudmundson; and many nieces and nephews.

He was preceded in death by his parents Maria and Sigvart Gudmundson, three brothers: Siebert, LeRoy, and Delyle; and two sisters, Myranda and Vivian.

A private family memorial service will be on Friday, December 9, at 2 p.m., at Fountain Lutheran Church with burial following at Minnesota State Veterans Cemetery in Preston.

Riley Funeral Home and Cremation Service of Chatfield,  is assisting the Gudmundson family with arrangements. Online condolences are welcome at rileyfuneralhomes.com.