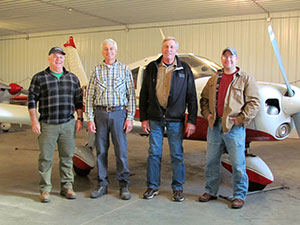 Knoepke joined the Army on May 13, 1953, one week after marrying Betty Miller spending from 1953-1955 in Korea. After Korea, he returned home to Fillmore County. Knoepke was a lifelong member and a past commander of the Preston V.F.W. and the Preston Legion.

Knoepke, very active in his community, served for 27 years on the Preston Volunteer Fire Department. An active member of the Preston United Methodist, he served as a trustee and cemetery board member.

On behalf of Knoepke’s family, his son Steve Knoepke expressed the family’s appreciation for the flyover, “The flyover meant the world to us.” Knoepke emphasized that the family did not ask for the flyover. “Dad’s flying buddies wanted to do it for their friend. Dad would have liked the flyover.”

According to Wikipedia, “The missing man formation is an aerial salute performed as part of a flypast of aircraft at a funeral or memorial event, typically in memory of a fallen pilot, a well-known military service member or veteran, or a well-known political figure.”

Traditions are significant in processing grief among various cultural groups such as pilots, the motorsport community, and football leagues. The missing man formation is rich in tradition.

“When fellow fliers pass away, we aviators say they have ‘gone west’ on their last flight,” as quoted on www.alliedpilots.org/GoneWest.

Another military tradition is “High Flight,” the most famous aviation poem ever written and the greatest aviation anthem. The author, Pilot Officer John Gillespie Magee, Jr., was killed in a mid-air collision in 1941, World War II. Defense Media Network www.defensemedianetwork.com/stories/high-flight-the-most-famous-aviation-poem-is-born/#nav reprinted and broadcast countless times. It is the official poem of the Royal Canadian Air Force and the Royal Air Force. First-year cadets at the U.S. Air Force Academy are required to memorize it. Extracts have been quoted on a variety of occasions, including funerals. The most famous example occurred on January 28, 1986, when President Ronald Reagan, speaking of the Challenger Space Shuttle disaster, closed his address with the sentence: “We will never forget them, nor the last time we saw them, this morning, as they prepared for their journey and waved goodbye and ‘slipped the surly bonds of Earth’ to ‘touch the face of God.’”

Oh! I have slipped the surly bonds of earth

And danced the skies on laughter-silvered wings;

Of sun-split clouds – and done a hundred things

You have not dreamed of – wheeled and soared and swung

High in the sunlit silence. Hov’ring there,

I’ve chased the shouting wind, along and flung

My eager craft through footless halls of air.

Up, up the long, delirious, burning blue

Where never lark, or even eagle flew –

And, while with silent lifting mind I’ve trod

The high untresspassed sanctity of space,

Put out my hand and touched the face of God.

The missing man formation is known as the finger-four, four-fingers formation, and the fingertip formation represents four planes. When looking at your fingers, notice that your fingers are not even. The finger left of the center finger is the plane that pulls up and flies west. There are two planes in each of the two elements. Finseth was the lead, and Dornink was Finseth’s wingman who pulled up and out.

Dornink is a formation flying enthusiast and a member of the Cherokees to Oshkosh A.K.A. “CtO” group. Dornink was the safety pilot because he trained and participated in the missing man formation with the CtO group. Dornink explained that safety begins on the ground in the hanger, where the pilots talk about the upcoming flight, plan a route, and create a safety plan. Then it is time to go out and practice the route to get the timing right. First, you start with two planes. Dornink stressed that it is not intuitive to fly close, and it takes a lot of focus. Finseth spoke up and stated that it like flying a mission. Both men noted that it sharpens your flying skills and makes you a better pilot.

Dornink finished by saying that, “People who like to fly formation become better pilots because they practice.”

Finseth mentions that he had put together a description of what was going on during the flyover. The folks at the Minnesota State Veterans Cemetery read it during Knoepke’s funeral. Finseth went on to explain, “The Cemetery had everything down to a fine science as far as timing is concerned, which made it pretty easy as timing is critical. You do not want to be disrespectful during the funeral ceremony too soon, nor do you want to go over too late. Finseth gives credit to his wife Mary Finseth. “My wife kept texting how things were progressing on the ground. Have to have our ground’s crew.”

Both men summarized that “It was an honor to fly for a friend and community member.”