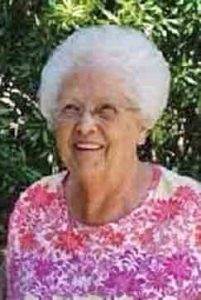 Evelyn Irene Johnson passed away on September 17, 2022, at the age of 93.  Evelyn was born on October 25, 1928, to Sever and Emma (Housker) Narum in Mabel, Minn.  She was baptized and confirmed at Scheie Lutheran Church.  She attended Riceford country school and graduated from Mabel High School in 1946.  On August 31, 1948, she married Odell Johnson in a double wedding ceremony with their good friends Marge and Arnie Engen.  They rented a farm in the Mabel area for three years before they purchased the family farm, where they lived until they sold the farm in 1989 and moved into Mabel.  Evelyn and Odell had four children:  Dave, Nancy, Dennis, and Duane.

Evelyn was active in Mabel First Lutheran Church where she taught Sunday School for many years and was active in the women’s circle.  Evelyn was an accomplished needleworker and quilter who made many quilts for her children and grandchildren.  She was a wonderful baker and loved to share recipes with her grandchildren.  She was an active member of the VFW Auxiliary and participated in poppy sales for many years.  She was also a 4-H leader for the Mabel Busy Bees.  Evelyn enjoyed vacations and bus trips after retirement with Odell.  Many good memories were made across the United States.

She was preceded in death by her son Dave, sisters Gladys Bagley and Vernice Simonsen, and brothers Hiram Narum, Mervin Narum, and Dean Narum.

Blessed be her memory.

Funeral service will be 11 a.m., Friday, September 23 at the Mabel First Lutheran Church. Visitation will be one hour prior to services at the church. The Mengis Funeral Home in Mabel is assisting with arrangements.