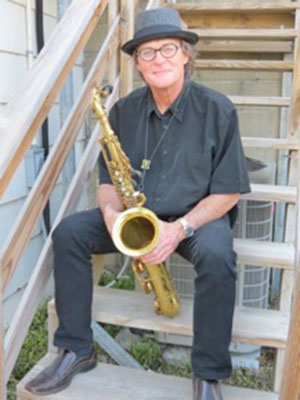 When Nathan Davidson was a Rushford High School student back in the late ‘60s, he knew he liked music but had no idea how it might fit into his future life. “I didn’t have much self-confidence in those days,” he remembers. “I could see myself maybe working in a music store, but I also thought about becoming a barber or a photographer. I didn’t know where I was headed.”

Fast forward 50 years. Young Nathan did get into music. Not only did he find his calling as a musician, he went to college, got a music degree, and encouraged thousands of young lives in a 30+ year career as a high school music and band instructor. Through all those years he also played in bands that opened for rock superstars, met and developed close ties with a true America jazz legend, and became a member and leader in some of the most respected and beloved bands in the history of southeast Minnesota. Somewhere that confidence must have kicked in.

Nathan’s journey shows the impact a loving parent – in combination with good and caring teachers – can have on a young life. Nathan had both. His mother, Eleanor, saved up money while working at the Winona Knitting Mills to buy him his first saxophone. Rushford teachers like Roger Young and Mike Tentis later encouraged Nathan to join the school stage and marching bands.  “I had always loved practicing my horn,” he says. “But when I got in those school bands, and even had opportunities to direct them, I fell in love with the whole environment. I found myself musically.”

That discovery didn’t immediately translate into career choices, though. After graduating from Rushford in 1969, Nathan continued playing in small bands for weddings and weekend gigs but his day jobs (like spraying weeds and being a “gopher” for a car dealer) weren’t providing much long-term potential, never mind fun. That’s when Tentis, his high school band teacher, stepped in again. “Mike kind of kicked my butt,” says Nathan. “He challenged me to think about college. I was afraid of failing, I think. But I listened to him and ended up first at Rochester Junior College and then Winona State. I’m grateful for Mike’s encouragement. We’re still friends today.”

In the summer of 1975 Nathan got his first real music job, directing the 5th-12th grade marching band in Independence, Wis. “I was a Norwegian-Lutheran in a Polish-Catholic community but it turned into two good years,” he says. From there he set his sights on Iowa where his girlfriend (later wife) Denise was also teaching music in Fort Dodge. After they got married, the couple moved back to Minnesota. The last 19 years of Nathan’s 34-year teaching career took place in Kasson-Mantorville before he retired from there in 2009.

During all those years – and very much still today – playing in a band, multiple bands actually, was a central focus of Nathan Davidson’s life. He joined the Chatfield Brass Band in 1978 and still plays with them 43 years later. “I was looking for a dance band, too, and got offered to join Ray Sands and the Polka Dots. That band has been making music for 72 years, which is amazing. At first I didn’t think I could handle the polka stuff, but 40 years later I’m still there and loving it.” Other bands he plays with include the CBB Jazz Combo, the Rutabaga Brothers (rhythm and blues), and Lost Faculties (classic rock and roll). He also does frequent freelance gigs with area big bands. Before the COVID pandemic, Nathan (a self-described Beatle fanatic) hooked up with “Ringer Star,” a Ringo Starr tribute band, playing on stage with them for 6,000 people in Rochester and at a later Lanesboro gig as well.

“My friends kid me about all the bands I’m in,” he says, with his distinctive laugh. “I have to keep track of lots of rehearsal and performance dates, but actually there have been very few conflicts. I’m busy, but it’s a fun busy. It doesn’t feel like work.”

Given all those styles of music – rhythm and blues, jazz, rock n’ roll, swing, polka – and the instruments he plays (“pretty much all of them,” he says, again with a laugh) what is his favorite music? “I’d have to say jazz,” he says. “They call it ‘America’s classical music,’ and it is, the music of wild abandonment. I love it. Jazz opened great doors for me.”

The greatest, he says, was the opportunity to meet and work with jazz giant Woody Herman, winner of multiple Grammys, and recognized internationally as one of the founding fathers of swing jazz/big band music, in the company of musical superstars like Glenn Miller, Tommy Dorsey, and Duke Ellington. “When I was 17 Mike told me Woody Herman was coming to La Crosse and I needed to hear him. I was underage so my mother took me and got me in. Woody and his band were so good, so cool, that after that night I went to see them whenever they were in the area. Without being a pest I just hung around them, got to know Woody’s agent, his road manager, the guys in the band, and Woody himself. He was very good to me. In 1986, I even went out to the Hollywood Bowl for his 50th anniversary concert.

“My dream was to get Woody to play locally so I took a financial gamble and self-produced a show. On March 23, 1987, ‘Woody Herman and the Young Thundering Herd’ played in Grand Meadow, Minn. One thousand people packed into the high school auditorium in a town with a population less than 1,000 – quite a night! Woody, 74 then, wasn’t feeling well; sadly this turned out to be his last public performance. He passed away about six months later. His daughter later sent me the blue formal dinner jacket Woody wore in Grand Meadow. I treasure it.”

Nathan treasures other musical memories as well. Lost Faculties, a band he helped start, has opened for Peter Noone and Herman’s Hermits, Big Brother and the Holding Company (Janis Joplin’s original band), and Rare Earth. With the Polka Dots, he played Garrison Keillor’s “Prairie Home Companion” national radio show, and – representing the state of Minnesota – at the John F. Kennedy Center for the Performing Arts in Washington, D.C. All of this for the kinda shy kid born in Preston, Minn.

What does music mean for Nathan Davidson? “Everything,” he says. “Woody called music ‘the great escape… when you’re out there playing good music no one and nothing can get to you.’ It feels like being on vacation. I don’t do it for the money. I do it because music makes people happy.”

That’s a goal all of us, not just musicians, should aim for, he says. “Musicians play, it makes people happy, and after the show they thank us and give us credit. But everyone has talents and skills. No matter what profession you’re in – plumber, house painter, ditch digger, whatever you do – you can help make someone happy. Whatever you’re doing try to leave the next guy smiling and feeling good.”

Looking back on his own 50-year music career, what advice would Nathan give to young musicians today? “I’d tell them to get out there and make as many connections as humanly possible. Take advantage of every opportunity you have to play your music. Try all kinds, explore more than one style, rock and roll, polka, jazz, whatever. Go for it, give it your best, and have fun!”

For booking information for “Lost Faculties” and other bands Nathan Davidson plays in, contact him at ndavidson@hmtel.com.