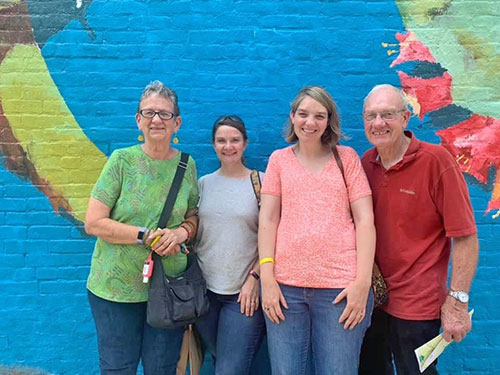 GCH Kara Kahl PGW Akebono, a six-year-old French Alpine owned and shown by Emily Thompson, earned champion Alpine in the open class at the recent ADGA (American Dairy Goat Association) national show in Louisville, Ky. Akebono beat out a field of 200–300 other Alpines to win the national champion award from the judges. This was the first champion win in the Alpine class at nationals for the Thompsons — a major win!

Thompson’s parents have raised goats for 50 years. She grew up showing 4-H goats at the Clearwater County Fair near Red Lake. When the family moved to southeast Minnesota they continued to raise and show goats. The Thompson family is one of three families that have continuously shown goats at the Minnesota State Fair since 1980, the first year that goats were exhibited.

The Thompsons began their herd with Saanen and Alpine goats; Emily’s sister Anna got a Toggenburg in 1991. Now the small herd consists of Emily’s 13 Alpines and Anna’s seven Toggenburgs. In the 1980s, the Thompsons won a reserve champion junior (non-milking) with an Alpine. In 2018, a Toggenburg from their herd won national champion in its class.

In 2016 Akebono won in her class as a milking yearling. Emily is proud that her family was able to feed Akebono well and help her make it through five deliveries to earn champion in her class six years later.

Akebono’s full name includes the herd name “Kara Kahl” which means carefree in Norwegian. The initials identify the sire. All the goats in the herd have names that begin with “A.” Emily admits it’s getting harder and harder to come up with new names; after a stint of Japanese names, they have now moved on to “old” names such as Agnes and Amelia.

Preparing Akebono for the show was a matter of clipping and bathing her, and then shaving her udder with a razor to show its definition. According to Emily, Akebono is the best milker in the barn and a nice doe who stands well for judging. She milked 3,500 pounds last year with an average of two gallons a day and a high of 18 pounds a day.

The goats are shown with 20 hours of accumulated milk in their udder. They are then milked out in the ring and judged again with an empty udder. Akebono won the best udder award as well at nationals.

Emily felt that having a year off from shows because of the pandemic actually helped Akebono; she added some extra weight which helped her. The judges used a scorecard to judge Akebono. She was judged on general appearance, dairy strength (milk production), body capacity (looking for width in the chest and a deep barrel), and mammary system (udder).

The Thompson family attends the ADGA show most years; it’s been their family vacation. Normally, Emily’s children would attend as well, but pandemic rules limited their attendance this year. The Thompsons will probably bypass the 2022 ADGA show in Oregon; travel across the Rocky Mountains is difficult with the trailer. They still show at club shows in Minnesota and Wisconsin and are entered in this year’s state fair.

According to Emily, the highlight of the ADGA show is seeing all the people, a small, but really unique and interesting group of people. She also likes seeing all the really nice goats that might be available for breeding.

Since Emily and her husband Jake Zdon live in Rochester, and her sister Anna Thompson-Hajdik lives in Madison, their parents Mary and Doug take care of the daily milking and feeding chores at their farm just off Mound Prairie Drive in rural Houston. Doug and Emily use a recently purchased milking machine to make milking a little faster and easier, but Anna and Mary still prefer milking by hand. On weekends the sisters take care of vaccinations, pen cleaning, clipping, and setting up breeding. Eventually, Emily would like to find a hobby farm in the area and raise a small herd of twelve goats. Raising and showing goats has always been a great family bonding opportunity for the Thompsons; Emily will continue with the family tradition. Congratulations to the Thompson family and Emily in particular on Akebono’s win!