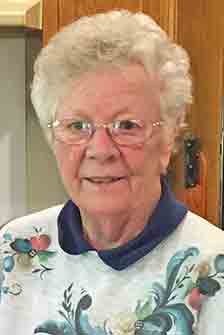 Ellen Marian Anderson was born August 2, 1937, daughter of Andrew and Clara (Skaim) Anderson, in Decorah. She was eleventh of 13 children. She was united in marriage to George Bidne September 5, 1959, at Big Canoe Lutheran Church in Decorah, Iowa. Together they had four children: Keith, Kevin, Kathleen and Karen. After George’s passing she married Arland Brown on June 23, 2001.

Ellen was a member of Big Canoe Lutheran Church Priscilla Circle, and an active member of VFW auxiliary for 54 years. She had a great personality, was funny and never missed out on telling a joke. She loved to give you a hard time, but she expected you to give it back in return. Anything for a good laugh. No matter what the situation she could find something humorous. She enjoyed making lefse with her sisters (Three Sisters Lefse), bird watching, gardening, socializing with family and friends, playing cards and pulling tabs. She loved dancing and never missed listening to the big bands on the radio on Sunday mornings before church. She was very proud of all of her grandchildren and great-grandchildren.

Ellen wanted to give special thanks to her friends Mike Timmons and Jeanette Paul for their excellent care.

Visitation will be 4-6 p.m. Friday, January 7, at the Mengis Funeral Home in Mabel, and one hour prior to services at the church.