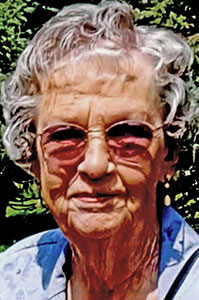 A memorial service will be held at 11 a.m. on November 20, 2021, at the Greenleafton Reformed Church, with Pastor Roger Lokker officiating. Her ashes will be laid to rest at a later date at the Minnesota State Veterans Cemetery in Preston, where her husband Stanley, who passed away on March 17, 2018, is buried. Visitation will be held for one hour prior to the service at the church.

Eleanor was born November 5, 1929, to Cornelius and Jane Vandewege. She attended eightyears of country school prior to attending and graduating from Panama High School in Panama, Nebr. After graduating, she took a job at the Elgin Watch Factory in Lincoln, Nebr. She still has a watch that she bought there.

Eleanor and Stanley met on a blind date. They were later married on September 22, 1950. They started farming until Stanley went into the service in 1954, which took them to Kansas and Washington State. In 1956 when he was discharged, they moved back to Minnesota and began farming again. They then adopted two girls, which completed their family.

Family was always important to Eleanor. For most of their married life, they worked hard on the family farm outside of Greenleafton. After selling the farm and moving to Greenleafton, they did a lot of traveling and mission work. They made it to all 50 states and Europe, wintering in Florida, Arizona, and McCallen, Tex. Playing cards with family and friends always brought many laughs and smiles, with a cup of coffee nearby. She was a joyful, positive, and inspiring person who found gratitude in life. She was always willing to help others.

Eleanor was preceded in death by the love of her life, Stanley; her parents Cornelius and Jane, sister Lorene, brother-in-law Jerry, and brothers Ivan (Betty)  and Merlin (Austrid).

Eleanor will be missed by many.

Condolences may be left at www.Hindtfuneralhomes.com