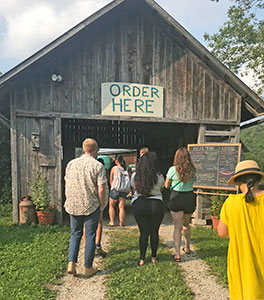 Where can you get a tasty wood-fired pizza decked out with local veggies and watch an opera containing all three episodes of The Odyssey? Friday, August 6, the answer was DreamAcres in rural Wykoff!

DreamAcres is a land collective ownership; it was begun by a group of people who had a goal of growing their own food while developing an alternative land ownership. After brainstorming, the group chose the farm name DreamAcres, a double entendre of “dream makers.” The group built their 60 acres farm from the land as they worked to understand the native heritage on the land and to try to repair the relationship with nature.

Spokesperson Eva Barr has worked on the farm since 1995. Barr explained the farm offers pizza nights, a summer camp, a performance series and other shows throughout the season. Crops grown on the farm are largely used to create the pizzas for Friday nights; the farm also sells garlic. At one time they sold CSAs, but no longer do so. They also no longer use work animals; Barr joked that work animals produce just enough crops to feed them. A single horse and the farm chickens supply the needed fertilizer for the gardens.

Friday pizza nights will continue until October 1; serving is from five until 8 p.m. or “as far as the dough stretches.” DreamAcres has been holding pizza nights since 2010. The menu changes every week based on the current harvest; all pizzas are vegetarian. Standbys cheese, vegetarian sausage, and basil are always available. DreamAcres staff members enjoy making up the punny menu offerings each week. Following the Odyssey theme August 6, they offered the Sirens, the Scylla, the Cyclops, and the Odyssey along with the opportunity to re-“quest” your own. I ordered the Siren, a tasty pizza that included vegetarian sausage, kale, black olives, and green peppers. Averaging 50 to 70 pizzas a night, the farm actually sold 92 that night.

At 6:30, the theater company Mixed Precipitation began their performance. This was sponsored by the Dreamery Rural Arts Initiative, a non-profit 501(c)(3) organization.

I hadn’t read or seen Homer’s Odyssey since Latin class sophomore year of high school, but this performance was easily understood by everyone. Gary Ruschman, the music director, juxtaposed Monteveri’s 1639 opera in Italian and songs from Dolly Parton. Ruschman revealed this was an easy transition; the same number of musicians are used for both types of music.  He has also mixed The Merry Wives of Windsor with Springsteen music, etc. Ruschman explained that in the off-season, the group picks a performance and he then looks for covers to use to tell the story.

The stage for the performance was a pickup truck and trailer; when the music was in Italian, the performers used simple text banners to explain with humor. Puppets and simple artwork are used as props in the play as well to both move the story forward and provide humor.

Director Scotty Reynolds shared that Mixed Precipitation was begun in 2009; many of the group have been with it since before 2016. The Odyssey is their main summer presentation this year. They toured  the Iron Range, will be in Oronoco, and then the metro area until September 12. The performance is “site responsive,” meaning it happens outside, not in a theater. Their mission statement declares, “Mixed Precipitation presents festive theatrical events that inspire social engagement.” The Odyssey certainly did that with lines such as, “Humans are too proud! They are the cause of their own guilt!” and, “You can unlearn what you thought you know – shatter my image with the rocks I throw!” Yet another thought provoking line was, “Smart people spend their time with people who give them something to think about.”

Flourish summer camp, also sponsored by Dreamery, provided youths ages 11-15 a week-long opportunity in July to learn puppetry, dance, music, and voice. During the week the campers take classes, write a play and rehearse it along with working in the gardens and prepping food. The week culminates with the campers performing their 3-4 minute productions.

DreamAcres has the only certified off-the-grid kitchen in Minnesota. Solar power provides electricity, pizzas are baked in a wood-fired oven, and rain water is used to flush toilets. Eva Barr commented, “We want to leave this place resilient for the future.” While a barn is available in case of rain for plays, the goal is to use outdoor areas for body-based physical arts with live performances rather than digital. Barr enjoys performances that invite dialogue with the audience.

There are still several chances to enjoy pizza nights and performances. On August 27, Queen B: A New Work of Honeybee Futurism will be performed. The play, set 100 years in the future, has humans organizing their cities like a beehive. That night will be the Onion Festival with different types of onions taking center stage on the pizza menu. Sarah Hansen, will be vending honey that evening as well.

If you are looking for something a little different to do on a Friday night, hop in your car and head to DreamAcres at 17289 Cty. Rd. 8, Wykoff for a pizza and performance. Feed both your body and soul!