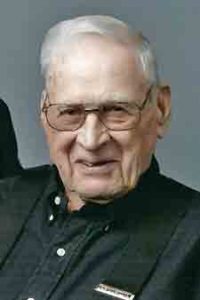 Donald was the first born to David and Laura Nadine (Halsey) Wynia on October 3, 1924. He grew up on the farm, where he experienced the Great Depression and the hardships of the Dirty Thirties. He graduated from Springfield High School in 1942. He attended Southern Normal College. He was drafted into the Army in 1945. He started his Army career as a lineman and was then sent to Halabird in Baltimore, Md., for counterintelligence training. The Army discovered he was too young and did not meet the age requirements, so they sent him to cooking school. He spent his Army career cooking and was honorably discharged from the Army as Corporal in 1947. He returned to Bon Homme County where he began farming with his dad. He loved farming and raising cattle, which he did until his retirement at the age of 75. On June 7, 1950, he married Alvina Palsma. They began their married life on a farm south of Tyndall, S. Dak. They were blessed with three children: Juanita, Donna, and Michael. They belonged to the Emmanuel Reformed Church where he served the church as an elder, a deacon, and Sunday School teacher (for over 50 years).

Donald always believed there was good in every person and was especially proud of the 20 years he and Alvina served in Prison Fellowship.  He also served his community by serving on several of boards: Farmers Union, CO-OP, Albion Bon Homme School District, Farmland Industries Board, and also on the B-Y Electric Board for over 50 years (30 years as president). After retirement he started a small motor business and was also a Dixon Mower Dealer, which he retired from at the age of 93.

In 2019 Donald’s health was declining and he moved to McCook Lake, S. Dak., with his wife.