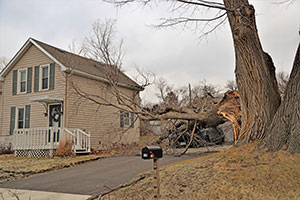 At the January 18 meeting of the Preston City Council City Administrator Joe Hoffman reported the storm of December 15 resulted in an estimated $57,000 in losses. Councilman Dean Aug was absent.

Trees down due to the storm within 100 feet of an insured facility will qualify for insurance coverage. Norby Tree Service was credited for their response to remove downed trees.

Councilman Robert Maust suggested the council should look into a stand-by power source for the sirens; the sirens didn’t sound on December 15 because power was down.

•Brittany Ristau and Marchel Comstock emailed Hoffman about the possibility of parking large trucks at the former Dairy & Farm site. Both their spouses drive semi-trucks. The city council previously approved 72-hour tractor trailer parking along the truck route. Parking on the truck route has not been an issue. Mayor Kurt Reicks said the truck route is made for heavy trucks and doesn’t break up.

During winter months, there was concern about trucks getting plowed in on River St.  Maust suggested the street be plowed one way away from the parked trucks, so they do not get plowed in. After some discussion the council agreed by consensus that the trucks should be parked on the east side of the street and public works will be asked to plow one way to the west.

•Preston Public Utility decided to make a direct loan of $100,000 to Dairy & Farm when the business built new in the city. The city purchased the former Dairy & Farm site in 2019; the city assumed the $100,000 loan at that time. No payment has been made on that loan as of yet. The city hopes to develop the site in the future. Hoffman said the city could make an annual payment to PPU or pay the full amount. PPU would like the site developed.

Maust noted that the Preston Historical Society has been using the building on the site for storage and for meetings. Hoffman explained any improvements to the building are limited to a cost of $21,000. In order to exceed that limit the floor would need to be raised 11 inches.