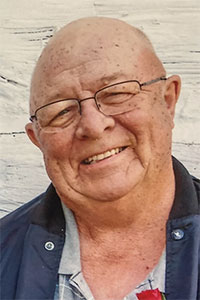 David Sikkink passed peacefully on September 30, 2021, after a courageous battle with Progressive Supranuclear Palsy. COVID-19 helped to expedite his entry to heaven. David Paul Sikkink was born on October 29, 1939, to Fay and Cleo Sikkink. He grew up on the family farm near Greenleafton. In 1976, that farm, now under his care, became a century farm and is operated today by the fourth generation, in his son Mark.

Dave attended country school at Buffalo Grove through the 8th grade, then graduated from Preston High School in 1957. He volunteered for the Army in 1958, sought and became a member of the 101st Airborne Division. He was also an awarded sharpshooter during his stint in the Army. He was honorably discharged in 1960 at which time he returned to the family farm. On August 25, 1962, he was united in marriage to Mary Ann Hovey. To that union, four children were born. Mary and Dave celebrated 59 years this year.

Dave was a lifelong member of the Greenleafton Reformed Church. He was a 27-year member of the Fillmore County Fair Board and a lifelong 4-H backer. He was a past commander of the American Legion as well as president of the Servicemen’s Board. He was one of the founders of the VFW Scholarship Fund. In his younger days, he travelled the area, gaming competitively with his horses and had much hardware to show for it. He was a member of the Greenleafton Saddle Club and spent many hours with his family trail riding or just riding for fun with friends and extended family. He was an avid supporter of the “Friendship Wagon Train” that raised funds for Camp Winnebago and Special Olympics. In his later years, he developed a “herd” of miniature ponies and shared them near and far.

Dave had a knack and fondness for providing fun for kids. He managed that with his ponies and carts as well as the barrel train he made and pulled behind his Gator. He provided the mini carnival rides at National Night Out in Greenleafton yearly, for many years. In line with being a lover of fun, Dave never let being a dairy farmer in the ‘70s stop him from getting his family to every home football or basketball game. He loved watching his kids and grandkids play sports over the years. He loved travelling to warm climates and enjoyed many years of Corvetting to the Black Hills with his wife and friends. All were welcome to drive his Corvettes. When he handed over the keys, he was famous for saying, “Drive it like you stole it,” and, “That’s what insurance is for.” He had an incredibly generous, sharing heart.

He was greeted in heaven by his parents, aunts and uncles, two sons, Lynn and Scott; and bonus son Eli Burkholder, his brothers-in-law, Guy Soland and Larry Hovey.

The service will be held on Wednesday, October 6 at 11 a.m. at the Greenleafton Reformed Church, with visitation one hour prior. Burial will take place at the Minnesota State Cemetery outside of Preston at 2 p.m. A celebration of life will follow at the Preston Servicemen’s Club.

Thank you for all the love, support and visits to dad at home and also at the care center. Thank you to Mayo Hospice and the Harmony Care Center for all of the tender loving care. We’re gloriously thankful that dad will see the harvest this year.