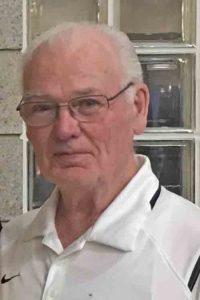 Dave was born November 3, 1937, to Oscar and Evelyn (Welch) Olson in Mabel, Minn. He told everyone that he was born above the liquor store; back then it was the Olson Cafe which was owned by his parents.

He attended Caledonia High School.  He served in the U.S. Air Force from 1955-1959. He worked at various jobs until 1967 when he took over the garbage route which is now Richard’s Sanitation. In 1969 he started working for the City of Caledonia as an electrician. In 1982, he worked at the Caledonia Post Office until his retirement in 2000.

Dave was a volunteer for Life-line (five years), Caledonia Food Shelf (10 years), and Caledonia Fire Department (22 years). His passion was teaching Firearm’s Safety where he was an instructor for 50 years.  In his years he was passionate about genealogy and donating blood to the American Red Cross, to which he donated 21 gallons. He enjoyed doing a Christmas display every year for families to enjoy. He was always willing to help others and always ready for a good time.

Visitation will be from 11 a.m. to 2 p.m. on Saturday, June 11, at McCormick Funeral Home, 205 E. Main St., Caledonia. Burial with military honors will follow in Evergreen Cemetery, Caledonia.

McCormick Funeral Home is assisting the family and online condolences may be given at mccormickfuneralhome.net.