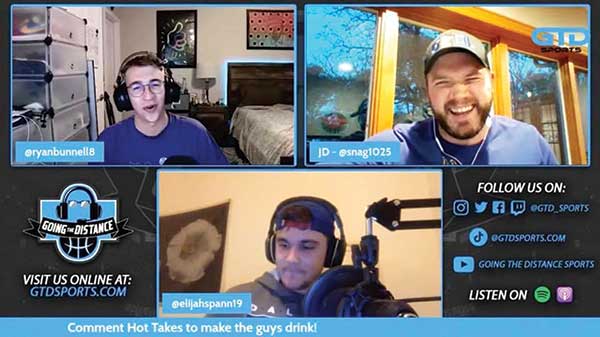 Chatfield resident James Danielson is not just a fan of the NFL.  He’s a team owner.  And, not just one team, but four fantasy football teams.

When he’s not managing Eyota’s Kwik Trip, volunteering for the Chatfield Fire Department, or spending time with his wife and kids, Danielson has been immersed in fantasy football.  “I have been playing fantasy football for 17 years, and have been commissioner of fantasy football leagues for about eight years,” shared Danielson.  “I am currently in four different leagues, and that is my typical number per season, any more than that and it can be a lot to manage.  Two of the leagues I’m in we have 10 teams, and the other two leagues we have 12 teams.  One league I’m in is with local people from Chatfield.  We have kept this league running for the last 17 years straight. One other league I’m in is also with local people from all over Southeast Minnesota, and we have been doing that league for about 10 years now I believe, or close to it. Then the other two I’m in are a bunch of random people from all over the globe.”

Fantasy football has been around for at least three decades.  For those readers not familiar with fantasy football, here’s how it works.  Eight to 12 people form a league and draft players in a similar manner as the actual NFL draft.  But, they are drafting players from teams in the NFL.  When the NFL season starts, participants select players from different positions, and they play against other teams in their league.  Each week, teams go head-to-head, gaining points from receptions, rushing yards, touchdowns, field goals, and various other football metrics.

Danielson has recently made a name for himself on the Fantasy Football scene with his podcasts and blogs, “I actually started working for Going The Distance Sports right before the NFL season started. I was scrolling through Twitter one day, saw that they had openings for bloggers and podcasters and decided to put my name out there. I’ve been a diehard fantasy football player the last 17 years, have gained a ton of knowledge from it over that time, and decided to try to put it to use to help other people out who play as well. Whether you’ve played for 17 years, or are just starting, the NFL changes constantly, which means the game of fantasy football changes, and you have to adapt as a fantasy team owner. No matter your experience, you will learn more every season, I guarantee it. That is half of the fun.”

At Going The Distance Sports, he’s one of their fantasy football guys.  “I typically do a Thursday Night Football preview.  Break the game down, give you some advice on who you should start from that game, who you should steer clear from, and then give you advice on DFS lineups (Daily Fantasy Sports), so a Draft Kings or Fan Duel lineup for those unfamiliar. I typically give you the price on all the notable players, because in DFS you get a salary to draft any team of players you want, as long as you fill your roster without going over your allowance. Then on the weekend my full Weekly breakdown releases where I give you players that fall into certain categories of my research and predictions. So, must starts, sit ‘em down, sleepers, and unknown dart throws. It’s usually pretty lengthy. I try to break down three players from each position in each category. Of course, you’re never 100% right on that kind of thing, you can do all the research in the world and yet you still get the fact that they still have to play the game and anything can happen. Take this last Sunday for example. Tom Brady has a juicy matchup against a Washington defense that has struggled big time against fantasy quarterbacks, they stink this year. So, naturally, I project Brady as a must start and he should throw four touchdowns and over 300 yards, right? Nope. Has an awful game, barely scores 13 fantasy points. It’s stuff like that, that can make my job hard and disappointing if I’m wrong, but that is also why it’s a game, and anything can happen. You just move on to the next week!”

Over the years, fantasy football has drawn a lot of attention.  In 2010, Omaha World Herald reported that an Omaha man, Spudd Mann, who finished last in his fantasy league, agreed to get a tattoo of a colorful unicorn and football with a rainbow as voted upon by his nine league members (friends).  These guys made “The Tonight Show” with Jay Leno.

Danielson had a story to share, as well, “One time an old roommate of mine from college made a bet that if he didn’t make the playoffs he would shave his head. He had made the playoffs consistently for five years and won the Championship a few times in that span, and was pretty confident about it. Well, he didn’t make the playoffs, so that night when he was eliminated from them we all got out the trimmers and did what had to be done. Hair hasn’t grown back since. Kidding, but it was fun to do that.”

For Danielson, “There are two things that I love the most about Fantasy Football: the competition and the comradery. I love the weekly competitive nature of it, going into a Sunday thinking you’re going to smash your opponent and cheering for players that aren’t even on your actual real life home NFL team. The comradery though probably takes the cake. As mentioned, I’ve been in two leagues for lengthy amounts of time. The one that I’ve been in for 17 years is with all of my classmates from High School. You know the story.  After High School, a majority of your buddies move away and you’re lucky to see them, let alone talk to them on a regular basis. This has kept us all in contact and close for all these years after school, and I’d like to think that is pretty great. Even these other two leagues I’m in with random people all over the world.  I’ve been in them for the last two years, and we all started out as a bunch of strangers, and now we would consider one another friends even if we have never formally met. Fantasy Football is a great community.”

This season, after week 10, Danielson’s records were 6-4, 6-4, 6-4, and 4-6.  “I guess you could say I’m pretty consistent this season. I should make the playoffs in almost every league, but its never a guarantee until the playoffs actually arrive. You could lose your stud players in seconds due to injury. Trust me, it happened to me last year when I lost both Christian McCaffrey and Raheem Mostert in the same week. Devastating.”

For anyone thinking about joining in the fun of fantasy football, the “biggest piece of advice I can give someone who is just getting into Fantasy Football is do it with people who want to do it, too. There is nothing worse than getting in a league and two people from the league quit halfway through the season. They don’t set their lineups, which can result in an easy win for whoever plays them that week. Make sure your buddies want to do it, that they are competitive, and that you know they’ll love it. Also, do the work. Do the research. Not only during the season, but follow it through the offseason. A lot happens when these guys aren’t playing the game. People get traded, retire, hurt, you name it. That’s one thing people don’t realize, if you want to be competitive in Fantasy Football, and make money, then you have to put in the work of researching players, match ups, the whole nine yards. I can promise you, that if you’re willing to do that, you will be a successful fantasy football manager. There are a ton of tools out there to use.  The fantasy football industry has boomed the last five years, and isn’t slowing down, which means more tools will come as well. I encourage serious players to use them,” explained Danielson.

He concluded with, “I want to shout out to the guys at GTD Sports too, they’re fantastic to work for and with. They are extremely busy, and yet find time to run this up and coming sports company. They have a great thing going down there in Texas.  They have a bright future, and I’m honestly extremely lucky to be a small part of it and to see this company growing. They have a ton of great writers and podcasters, and they deserve a ton of recognition. So thanks again to Ryan and Elijah for bringing me into the fold.”

If you’re looking for fantasy football advice and lively commentary, check out James Danielson’s fantasy football podcasts and blogs at www.gtdsports.com.  The Twitter handle is @GTD_Sports.